Taiwan's Golden Comic Awards ceremony to be broadcast on Oct. 17 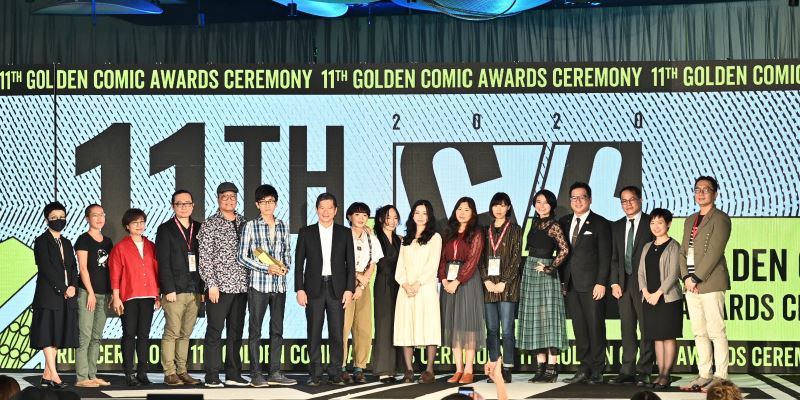 Comic fans are invited to celebrate the artistic achievements of comic creators, as the ceremony of the 11th Golden Comic Awards (GCAs), which took place on Sept. 28, will be made available on television. Taiwan Television Enterprise (台灣電視台) will broadcast the ceremony on Oct. 17.

The ceremony for Taiwan's top award for the comic arts kicked off at the Taipei New Horizon Building with a showcase of characters from the nominated comics. TV audience will be able to see real life representations of the characters appear on stage against a huge projection displaying scenes illustrated in the creations.

In addition to awards that acknowledge special contribution to the art form, best new talent, best editor, and best cross-media application, this year's GCAs honored six recipients of the Comic of the Year award, among whom one was selected to receive the Golden Grand Prize – a departure from past practice.

According to the organizer, Comic of the Year went to Chen Pei-hsiu's (陳沛珛) "For the Time Being (暫時先這樣)," and Ruan Guang-min's (阮光民) "A graphic novel adaptation of selected stories from The Illusionist on the Skywalk and other stories" by Wu Ming-Yi (天橋上的魔術師圖像版：阮光民卷).

"Time Swirl" by Nobi Chang won the grand prize for its time-themed storyline that explores timeless topics surrounding human nature – from a philosophical perspective. Cartoonist Loïc Hsiao (蕭言中), whose creative comics are praised to have reflected collective memory shared by generations, was named the recipient of the Special Contribution Award.

Due to COVID-19 travel restrictions, international exchange activities traditionally held in line with the GCAs were replaced with an eight-day event composed of themed exhibitions, forums, pitch sessions, and artist meet-and-greets, drawing around 4,000 people from Sept. 22 to 29 at Taipei-based Songshan Cultural and Creative Park.