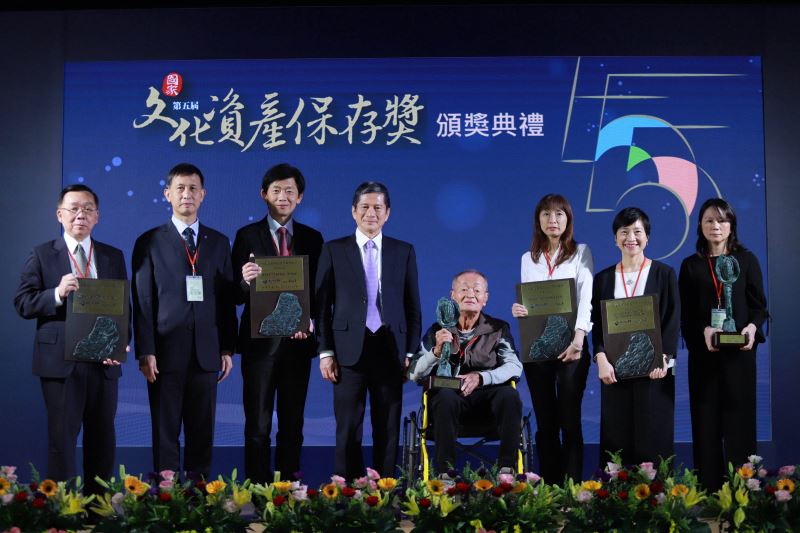 In the tangible cultural asset category, the recipients are restoration and preservation projects of the Railway Division of Taiwan Governor-General's Bureau of Transportation (臺灣總督府交通局鐵道部) in Taipei, the Old Tainan Watercourse (原臺南水道), the British Consulate and Consular Residence at Takow (打狗英國領事館及官邸) in Kaohsiung, and two set of archives that document the development of the Taiwan Railways Administration (臺鐵公文檔案).

Also known as the Taihoku Railway Bureau, the Railway Division of Taiwan Governor-General's Bureau of Transportation was the administration for managing and operating the island’s railways during the Japanese rule era.

Now transformed into a museum, the complex has undergone a years-long, systematic restoration and preservation, which would serve as a model for future conservation of historic constructions in the nation.

Also built during the Japanese rule era, the Old Tainan Watercourse is a testimony to the modernization of the city's drinking water system and public health infrastructure. The historic landmark, now restored and well preserved, is of educational and cultural significance and has become a tourist spot for its surrounding landscapes.

The British Consulate and Consular Residence at Takow is located next to Kaohsiung Harbor, encompassing the consulate residence on the hill, consulate office at the hillside, and a trail path that connects the two. With the restoration efforts made by the local government, the complex has now regained the glory it had 150 years ago.

The two precious bundles of railways archives, meanwhile, were discovered in the Taiwan Railways' warehouses in Taipei's suburban Shipai district and have been restored and digitalized in line with international standards by the National Development Council. The documents will serve as the first-hand information pertaining to Taiwan’s railways development and social-economic transformation.

Lead Jade Life & Culture is a team that collaborates with local authorities to preserve, restore, and reuse historic buildings. With the goal to enrich urban and community culture, the team takes initiatives to launch projects that promote the aesthetics of daily life and Taiwan’s historic heritage.

Established in 2009, the National Cultural Heritage Preservation Awards aims to encourage individuals, groups, and corporations to participate in preserving cultural heritage, and to award such contributions.

This year, a special exhibition will also be held from Oct. 31 to Nov. 15 at the Cultural Heritage Park to showcase Hsu's artworks as well as unique architectural features of the railway division buildings and the British Consulate and Consular Residence.