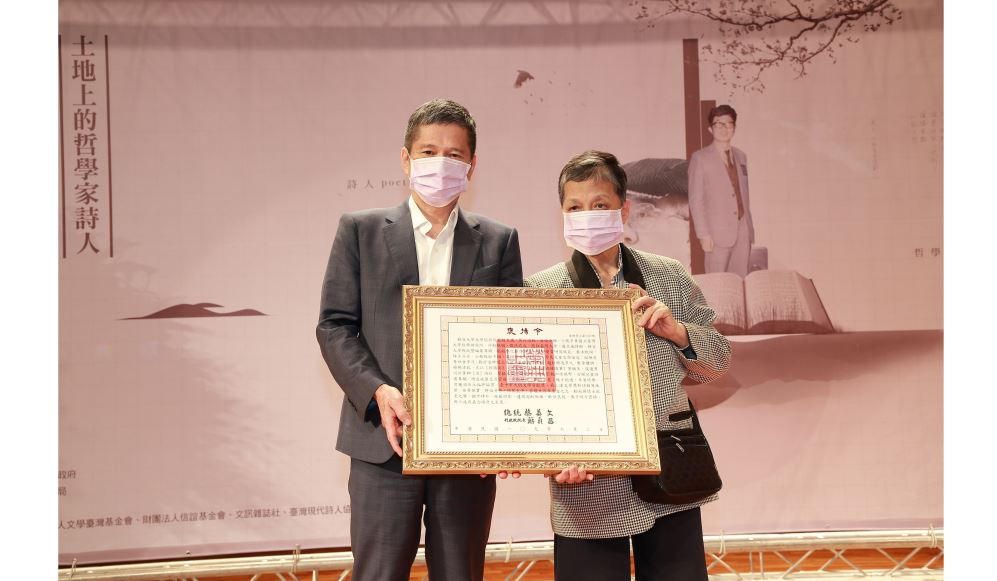 To honor the late nativist poet Chao Tien-yi's (趙天儀) decades-long contribution to contemporary Taiwanese poetry and children's literature, Minister of Culture Lee Yung-te, on behalf of President Tsai Ing-wen, conferred a posthumous presidential citation at a memorial service held on Nov. 14 in the Taichung-based Providence University where the author used to teach.

Chan Hsiu-chin (詹秀金), the poet's wife, received the citation on behalf of Chao.

Praising the poet's resilience and strength, Lee said, how Chao embraced life was akin to verses in his poem "Little Grass (小草)" -- "When the sun shines blazingly, I hold my head high. When the storm rages on, I stay green with dignity."

"No matter how challenging the time had gotten, Chao championed liberalism, with his poems, he became the man of courage, embarking on a literary journey with determination and planting seeds of lovely flowers in this land. The image of professor Chao cultivating this land has imprinted itself at the heart of each of us," Lee stated.

Regarded as one of the most eminent poets in Taiwan's contemporary poetry scene, Chao was also a pioneer and promoter of children's literature. The Taichung-born writer, in later years, devoted himself to teaching and writing for children, tackling a range of themes with his simple yet authentic words.

As one of the founders of Li Poetry Society (笠詩社), a literary club composed of Taiwanese nativist poets, Chao attached great importance to the links between modern Taiwanese poetry and the reality of Taiwanese society.

On the academic front, Chao had published books addressing literary criticism on contemporary Taiwan poetry and introduction to children’s literature in Taiwan, and the writer's expertise in poetry studies, children's literature, and comparative literature had won him a string of accolades, including Wu Yung-fu's Cultural Criticism Award (巫永福評論獎) and the Da Dun Literary Award (大墩文學獎).

The philosophy major donated his personal manuscripts and his collection of Taiwan's poetry publications to the Tainan-based National Museum of Taiwan Literature. To mark Chao’s tremendous contribution in the research, preservation, and promotion of the Taiwanese literature, the museum in December will publish a collection of the poet’s literary works that document the author’s ideas and creations in the fields of philosophy, literature, and aesthetics.