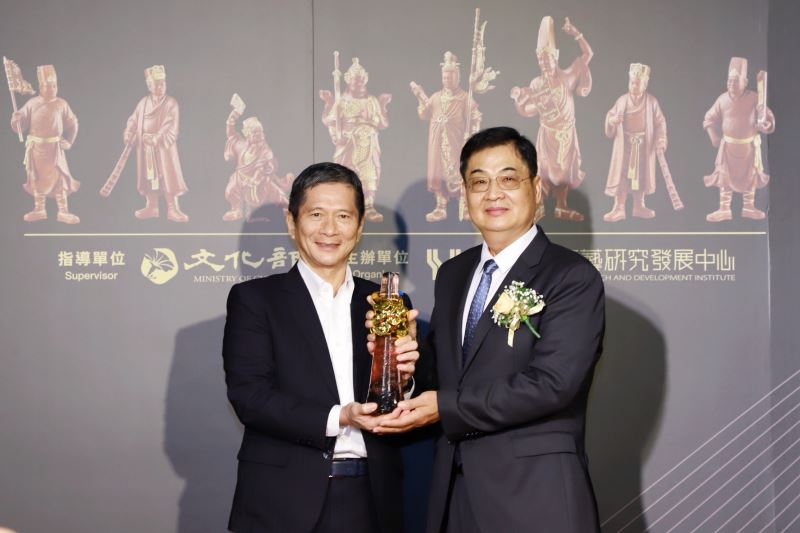 Chen, who was selected from among 14 veteran crafts masters for the honor, said in his acceptance speech that the award is more than an honor; it is a token of responsibility of keeping the heritage alive.

The artisan said he demands himself to take on the important task of passing on the traditional craftsmanship of the nation. He also announced that eight of his bronze deity statues will be donated to NTCRI for preservation.

Born in 1963 in Tainan, southern Taiwan, Chen took up an apprenticeship under master Lin Yi-shui (林依水) of the Fuzhou School at the age of 14 to learn how to make Buddhist wooden sculptures. Through learning and experience, he has developed a mastery of the carving of Buddhist statuary, becoming one of the most representative woodcarving artists of the school.

To breathe new life into traditional woodcarving, Chen founded Chi-Tsun Sculpture Studio (啟村雕塑工作室) in his hometown Tainan in 1986. Over the years, the artisan has won a series of accolades, including the second prize at the National Traditional Crafts Awards and the Sanyi Wood Carving Achievement Awards.

In 2007, Chen was conferred the Da Dun Crafts Master Award, a recognition by the Taichung City Government that acknowledges distinct craftsperson. In that same year, he was also awarded with certification of the "Taiwan Crafts Workshop (臺灣工藝之家)," a program launched by the NTCRI to select well-skilled craftsmen and crafts workshops representing the vitality of Taiwan's emerging craftsmanship aesthetics and having outstanding achievements in various craft disciplines.

While expressing his appreciation for Chen's years-long endeavor in excelling the craftsmanship, Minister of Culture Lee Yung-te said at the ceremony that the artist not only perpetuates the art of woodcarving, he also transforms the traditional art form with the touch of contemporary arts.

Jury member Lin Bao-yao (林保堯), meanwhile, said Chen’s artworks can be seen in temples across southern Taiwan and have been preserved by museums home and abroad, such as City God Temple in Kaohsiung, Bao'an Temple in Tainan’s Shuzijiao, Miaoli’s Sanyi Wood Sculpture Museum, and Matsura Historical Museum in Japan.