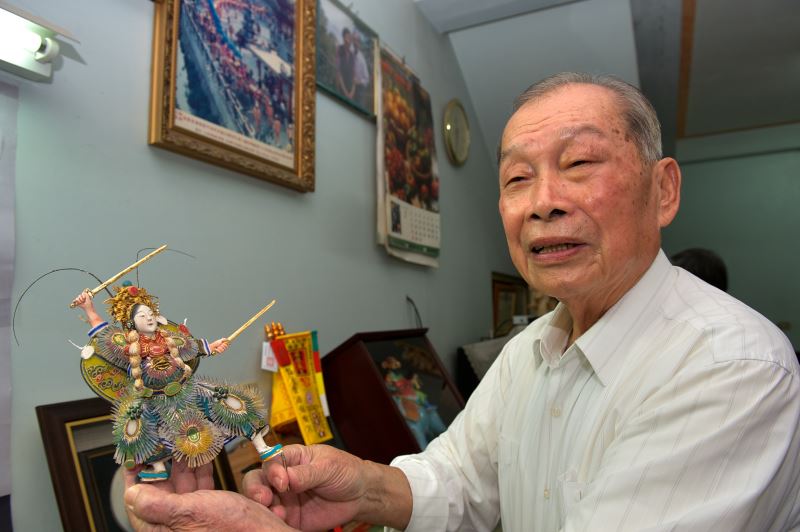 Cut-and-paste ceramic artist Wang Bao-yuan (王保原), an important preserver of traditional crafts designated by the Ministry of Culture, passed away on Feb. 6 at the age of 93.

Minister of Culture Lee Yung-te expressed his condolences upon hearing the news, and instructed the Bureau of Cultural Heritage (BOCH) to assist Wang's family in planning his funeral.

Born in Tainan City in 1929, Wang began learning temple art from his father Wang Shi-fa (王石發) at the age of 19. With accrued experience in temple painting, he developed a keen understanding of oil paints and brush strokes. Later, he became a student of He Jin-long (何金龍), a cut-and-paste ceramics master, and was the only inheritor of He's specialist techniques.

Wang's works can be found at more than 10 temple rooftops and walls across Tainan City. The characters in his works are filled with lively expressions and spirited body movements, heavily imbued with local characteristics and artistic uniqueness.

Specialized in techniques known as kangchui (摃槌) and jiamao (甲毛), which involve cutting glass into matchstick thinness or crescent-moon shapes, Wang was also knowledgeable in traditional temple architecture. He had collected many reference books and cut-and-paste tools.

Wang was designated by the Ministry of Culture as a cultural heritage preserver of the cut-and-paste ceramic art in 2011, assuming the title of "living national treasure."

Over the past years, he had held eight workshops in collaboration with the BOCH and the Tainan Municipal Administration of Cultural Heritage (TMACH), training cut-and-paste ceramic art apprentices to pass on the craft.

In 2017, Wang was recognized by the 4th National Cultural Heritage Preservation Awards for his contributions.

Minister Lee pointed out that Wang had dedicated his entire life to the promotion, preservation and transmission of cut-and-paste ceramic art, and, despite his passing, his legacy of dedication will be cherished forever by future generations.