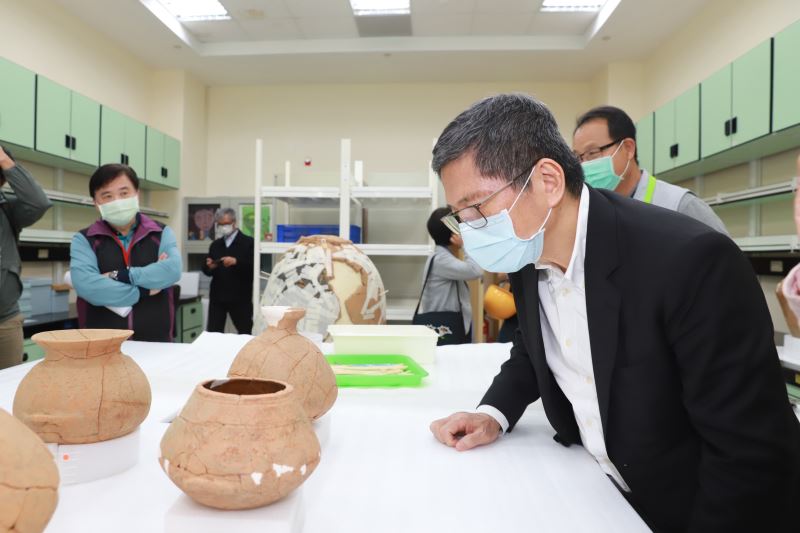 During his meetings with Chiang and Yen, Minister Lee exchanged views with them, regarding arts promotion efforts in the east coast. The internationally renowned artist Chiang in 2008 set up his art studio in Taitung and he is planning to expand the studio into a cultural park. Construction of the cultural park is scheduled to begin early this year, and the park is expected to open to the public in the middle of next year when the first phase expansion project is completed. Yen has pledged that the Alliance Cultural Foundation will assist with the management of the park.

Lee indicated that he felt deeply the impact of the Taitung's local environment on Chiang’s constantly evolving creative prowess and appreciated the ideal of Chiang and Yen to group together artistic clusters and create an international art hub in Taitung. He said that it is expected that more resources will be put in to support the project.

Lee subsequently visited the NMP and the NMP's Beinan Cultural Park. From July 1, 2020, the NMP began to refurbish the architectural structure of the main building and upgrade hardware and software facilities of the museum, and a new exhibition room for Austronesian culture is under planning.

Lee noted that the prehistoric archeological objects unearthed in Taiwan, coupled with NMP's research on ancient Austronesian cultures and related collections, enables the public to see the connections between Taiwan and the rest of the world which can be traced back thousands of years.

In the afternoon, Culture Minister Lee, accompanied the magistrate of Taitung County Rao Ching-ling (饒慶鈴), visited the Minquan Village Japanese-styled Architecture Park. The Japanese-styled housing units were built in the 1940s during Japanese rule. It was designated a cluster of historical buildings by the Taitung County Government in 2007, and is recognized as one of the best-preserved Japanese-style housing complexes in Taiwan.

Lee expressed his hope that the rich artistic atmosphere and cultural diversity in Taitung can become stimulus to domestic tourism and the local economy, transforming Taitung into an important international landmark.