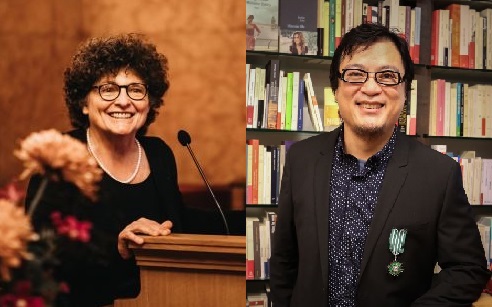 The "Taiwan-France Cultural Award," jointly established by the Ministry of Culture and the Academy of Moral and Political Sciences under the Institut de France, hosted its 25th awards ceremony at the institute in Paris on March 1.

Professor Jana has visited Taiwan many times for research since 1994. After returning to Slovenia, she founded the Department of Asian and African Studies at the University of Ljubljana.

In recent years, she has devoted herself to exploring Taiwan’s modern and contemporary philosophy, and has brought to light the contributions made by Taiwanese philosophers to the field and introduced to European academic circles.

In 2019, she published several articles on the role Taiwanese philosophy plays in the transmission of Eastern philosophical traditions, while at the same time promoted cooperation between universities in Slovenia and Taiwan in hopes of deepening cultural ties between Taiwan and Europe.


In addition to being one of the founders of Association Taïwanaise des Traducteurs de Français (台灣法語譯者協會), Wu Kun-yung has participated in social movements through his publications. Through the books he has published, he has contributed to stimulating discussion regarding the abolition of death penalty.

In 2018, Wu was awarded the Ordre des Arts et des Lettres for his role as a bridge between Taiwan and France, specifically in the fields of humanities, literary publishing and cultural exchange.

The MOC and the Institut de France have jointly administered the Taiwan-France Cultural Award since 1996.

The selection of winners for the 25th Taiwan-France Cultural Award was originally scheduled to take place in Taipei last year. Due to COVID-19, however, the Permanent Secretary of Institut de France Jean-Robert Pitte, Taiwan's representative to France Wu Chih-chung (吳志中), along with the jury panel in Paris instead selected the winners for this year's Taiwan-France Cultural Award.