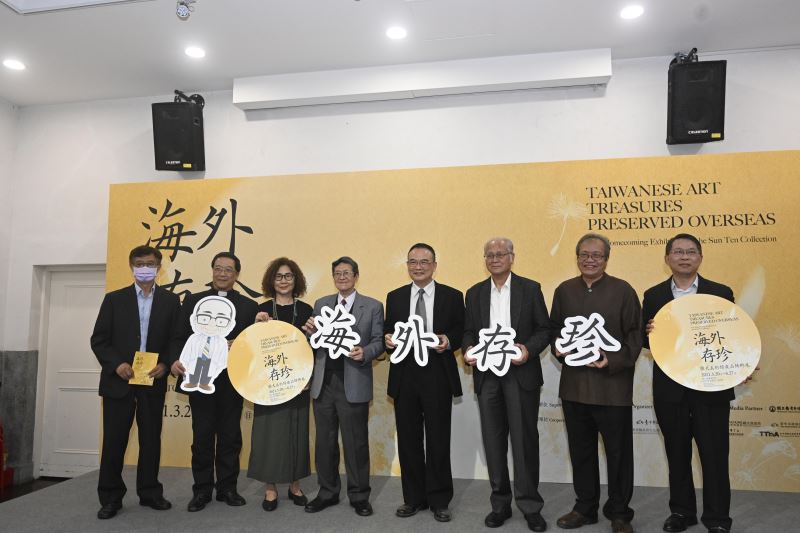 The National Taiwan Museum of Fine Arts (NTMoFA) on March 12 held a press conference at Zhongshan 15, an art center in Taipei City, to announce that the "Taiwanese Art Treasures Preserved Overseas – The homecoming Exhibition of the Sun Ten Collection (海外存珍-順天美術館藏品歸鄉展)" will officially begin on March 20. The donation agreement between the Ministry of Culture and Sun Ten Museum in Irvine, California was signed in 2019.

Sun Ten Museum was founded in 1996 in commemoration of the late entrepreneur Dr. Hsu Hong-yen (許鴻源), a devoted supporter of Taiwanese artists who had the most extensive collection of artworks by Taiwanese artists.

Deputy Minister of Culture Hsiao Tsung-huang indicated that the decision of Sun Ten Museum to donate was significant to MOC's "Reconstruction of Taiwan's Art History" initiative. He expressed his gratitude towards the late Dr. Hsu, for leaving precious artistic assets for Taiwan through his collection, and to Hsu's son Charles Hsu (許鴻源), for following in his father's footsteps, and director of Sun Ten Museum Chen Fei-long (陳飛龍), for his thorough cataloguing and research on the collection.

NTMoFA Director Liang Yung-fei (梁永斐) pointed out that it was through concerted efforts of the public as well as private sectors to have the donated artworks delivered to Taiwan. The exhibition will highlight the artworks, and, at the same time, it will enable the public to see the achievements of the implementation of the "Reconstruction of Taiwan's Art History" initiative.

"Taiwanese Art Treasures Preserved Overseas – The homecoming Exhibition of the Sun Ten Collection (海外存珍-順天美術館藏品歸鄉展)" will be held from March 20 to June 27, displaying 232 pieces of art by 195 Taiwanese artists born between 1871 and 1989. The exhibition will also showcase rare art pieces by Japanese painter Kinichiro Ishikawa (石川欽一郎. 1871 - 1945), a pioneer of art education in Taiwan. The Museum has installed a digital interactive wall to enhance visitors' experience.

The NTMoFA will continue to use the donated artworks from Sun Ten Museum in promotion of the fine arts in the future.