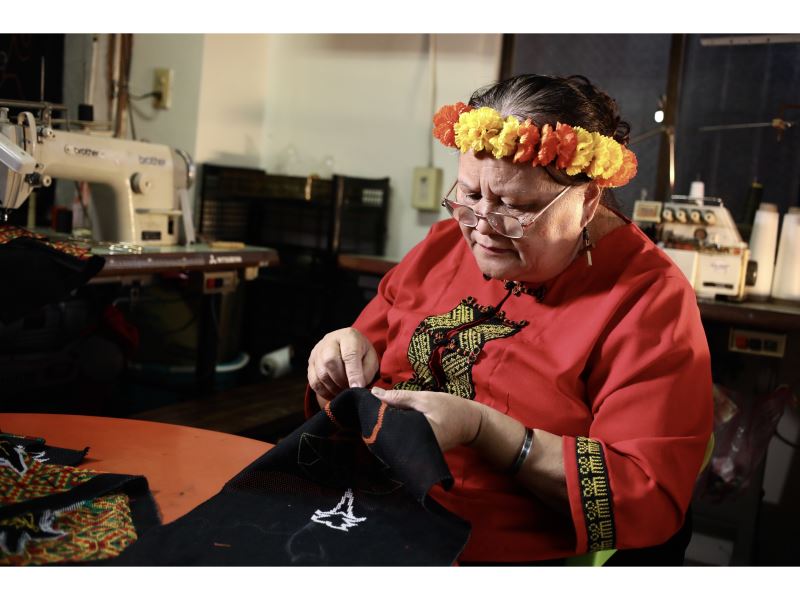 Luo Mei-yu (羅美玉), an indigenous artist specialized in Rukai tribe embroidery, is among the 25 craft artists selected in the sixth "Taiwan Crafts Workshop (台灣工藝之家)" program sponsored by the National Taiwan Craft Research and Development Institute (NTCRI) to recognize the achievements of outstanding crafts artists. She is the only indigenous artist honored in this year's selection.

In recognition of Luo's contribution to the preservation of the traditional Rukai embroidery, Taitung County Magistry Rao Ching-ling (饒慶鈴) on March 21 visited Luo and presented the certification and a plaque awarded to her by the NTCRI.

Rao pointed out that Luo, who has engaged in embroidery crafts for 33 years, is good at traditional tribal embroidery, designing her works with motifs related to Rukai’s legendary stories and the beliefs of Christianity. Her exquisite embroidery works reflect the tribal culture, and they have been recognized with awards at many exhibitions.

Commending Luo's achievements, Rao said that population diversity contributes to multiplicity of cultural creativity in Taitung. She hopes to promote Taitung's cultural characteristics as part of tourism, and Luo can play an important role, to help revive the tribal culture of Rukai's Taromak clan.

By including visits to the Taiwan Craft studio in travel itineraries of tourists, crafts and tourism will be integrated, and the craft studio will become a base for Taitung's craft culture, she added.

Taitung County Cultural Affairs Department stated that the county government has initiated the project to preserve and maintain Luo's embroidery techniques, so that the traditional craft of the Eastern Rukai will be preserved and passed on, and, inspire innovative works.

The Taiwan Crafts Workshop program was established in 2004 to certify gifted artisans. Between 2004 and 2012, five selections were carried out, with 145 artisans certified. In its sixth selection, the preliminary shortlist was based on the recommendations of county and city governments, and those who were selected needed to pass through three trials.

Professional experts and scholars were invited to conduct the process of selection. The final selection was on-site evaluation. The comprehensive evaluation included crafts achievement, characteristic, and display setup. A total of 25 crafts artists received the certification in this year's selection.