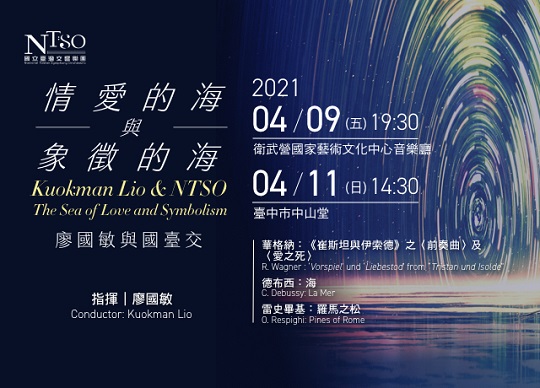 The National Taiwan Symphony Orchestra (NTSO) conducted by Lio Kuokman (廖國敏) will give the concert "Kuokman Lio & NTSO – The Sea of Love and Symbolism" at the National Kaohsiung Center for the Arts on April 9 and at Taichung City's Chung Shan Hall on April 11.

Conductor Lio from Macau once again collaborates with the Taichung based NTSO to present masterpieces of orchestral music, including : "Vorspiel," and "Liebestod" from Wilhelm Richard Wagner's "Tristan und Isolde," Claude Debussy's "La Mer," and Ottorino Respighi's "Pines of Rome."

A beloved orchestral conductor, Lio is resident conductor with the Hong Kong Philharmonic Orchestra and has previously served as assistant conductor to music director Yannick Nézet-Seguin with the Philadelphia Orchestra. Since March this year, he has been cooperating with the NTSO as well as Taiwanese musicians Richard Lin (林品任), Hsiao Hui-chu (蕭惠珠), and Pan Yi-tzu (潘怡慈).

The concert will begin with the rearrangement of German composer Wagner's masterpiece "Tristan and Isolde (1859)." "Vorspiel and Liebestod" is the prelude and final scene combined and rearranged for orchestra concerts. The rearrangement conveys the essence of the entire opera: the desire, struggle, disappointment, and intoxication of love and lust, transforming the whole presentation into a violent sea of love with continuous surges of emotions, according to NTSO introduction.

French composer Debussy's orchestral piece "La Mer (1905)" will follow. Deeply influenced by Wagner, Debussy had drawn inspiration from him in developing his own unique musical style.

Unlike the Wagnerian sea of turbulent love, "La Mer" was inspired by the era's symbolism of an otherworldly sea that is imbued with spirituality and poetic mystery.

In the three movements, Debussy presents a multilayered and erratic musical style with elusive dynamics in addition to a hollow sense of space.