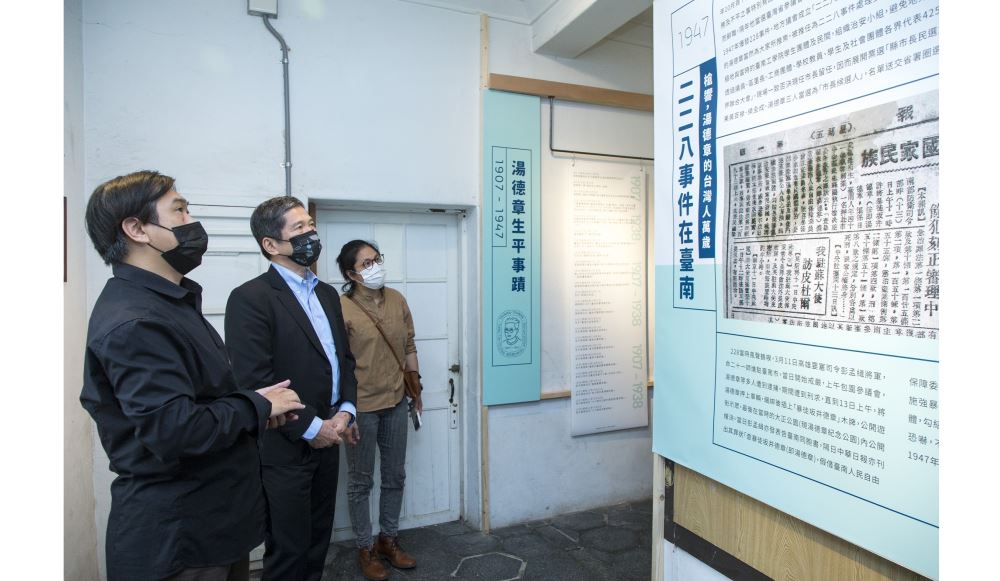 Former residence of the late lawyer Thng Tik-tsiong (湯德章, 1907-1947), a victim killed in the February 28 incident in 1947, has been converted into a memorial house, and the Thng Tik-tsiong Memorial Hall was officially opened on March 13.

Attorney Thng Tik-tsiong (湯德章) devoted his life to the protection of human rights. After the 228 incident in 1947, he was arrested, and on March 13 that year, he was executed in public at Tainan's Min Sheng Green Park.

Some citizens in Tainan initiated a fundraising in 2020 to purchase the former residence of Thng, and they formed the Tainan Thng Tik-tsiong Memorial Association for the preservation of Thng's legacy. Through their efforts, Thng's former residence was transformed into a memorial house, with memorial collection of photos and objects of Thng on display.

Stressing the admirable efforts of the private sector in preserving Thng's former residence, Culture Minister Lee Yung-te pointed out that the Ministry of Culture will not only provide budget support, but also coordinate with related government agencies to clarify the status of the memorial house as a "registered historical building" in line with the "Cultural Heritage Preservation Act (文化資產保存法)."

Lee indicated that in the future, the MOC will follow the model of cooperation between the NHRM and smaller exhibition houses in promoting substantial exchanges and cooperation in relation to exhibitions and educational activities between Thng Tik-tsiong Memorial Hall and the NHRM.

Lee also invited the Thng Tik-tsiong Memorial Hall to join the Federation of International Human Rights Museum – Asia Pacific (FIHRM-AP), the Chinese Association of Museums (CAM), National Human Rights Commission (NHRC) and the Committee for Museum Exhibition, to foster information sharing with other museums and contribute to the promotion of human rights in Taiwan as well as international community.