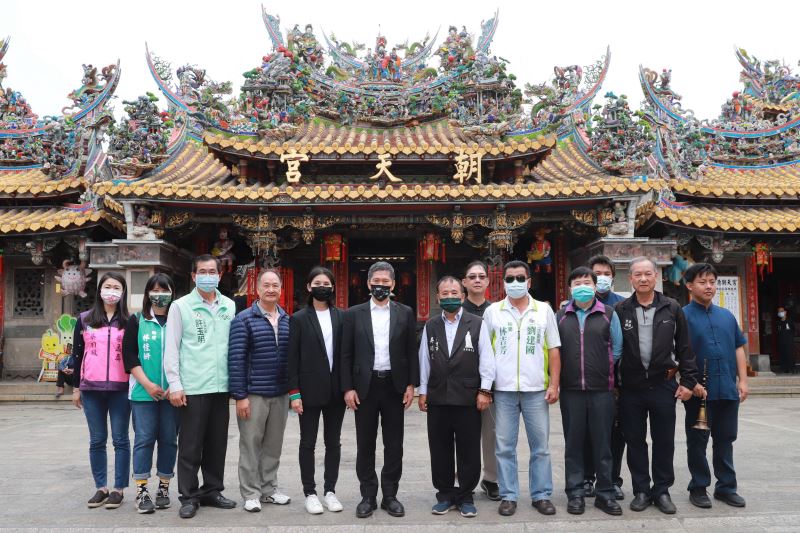 The Beigang Chaotian Temple was established in 1700, and designated a national monument in 1999. One of Taiwan's important religious establishments, the temple contains many precious tangible and intangible cultural assets. In order to preserve national cultural heritage, the MOC has provided subsidies to the implementation of the Chaotien Temple research and renovation project as well as projects to preserve and promote the Yi-ge (藝閣) art form.

To address the serious problem of subsidence in the left side of the temple's San Chuan Palace (三川殿), Lee instructed the Bureau of Cultural Heritage (BOCH) to provide immediate assistance to the temple management in carrying out the environmental and geological monitoring plan.

Lee later visited the county-designated monuments Jiya Society of Beigang (北港集雅軒) and the Beigang Dafu Theater (北港大復戲院), both of which are under the Beigang artistic tradition preservation and renovation project. A lively performance delivered by the Beiguan Traditional Opera Troupe (北港集雅軒北管樂團) fully demonstrated the charm and passion of traditional music and folk array performances.

Lee expressed his hope that the newly renovated Jiya Society of Beigang will become an important center for learning and transmitting Beiguan music in Yunlin.

In the afternoon, accompanied by Wu Mao-song (吳茂崧), chairman of the Beiji Temple in Dapi township, and Dapi township mayor Lin Sen-bao (林森寶), Minister Lee visited the Beiji Temple, where the mummified body of Ke Hsiang (柯象), a holy figure from the Qing-era, is on display. Under an agreement between the temple and the National Taiwan Museum reached in 2011, the mummy is to travel back and forth between the temple and the museum, which has been responsible for the preservation of the mummy.

Expressing his concern regarding the preservation, maintenance and transportation of the mummy of Ke Hsiang, Lee pointed out that the mummy exhibit sets a good example of cooperation between the government and local communities.

He expressed his hope that with museum professionalism, cultural assets can be well preserved and the research and exhibitions will allow the public to learn many interesting and moving stories.