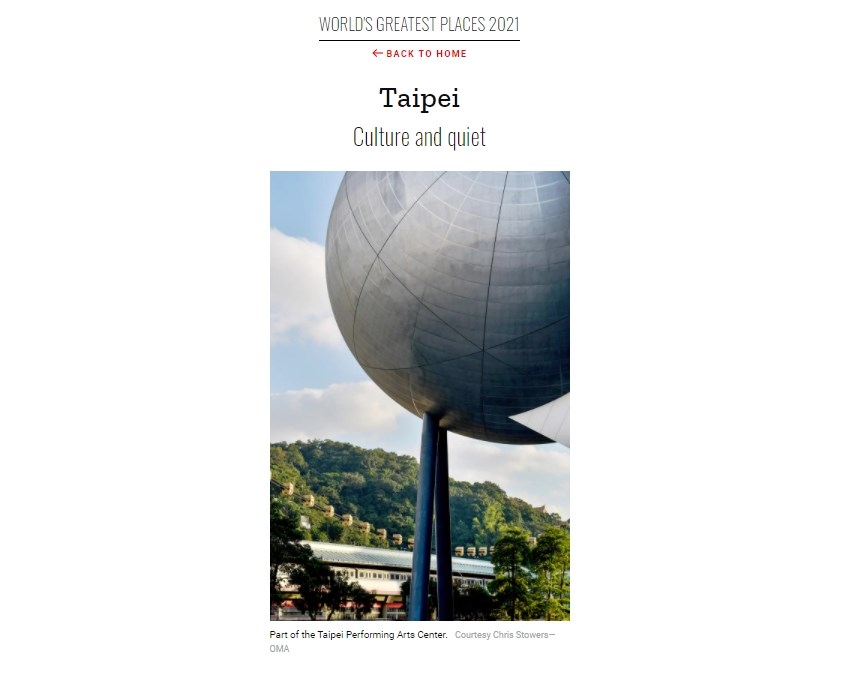 New York-based news magazine and website TIME has released its third annual list of the "World’s Greatest Places 2021," with Taipei featured among the list of 100 destinations alongside some of the world’s famous cities.

TIME commended Taipei for its "culture and quiet," stating that the slate of openings – which includes the debut of National Center of Photography and Images, the Taipei Performing Arts Center, and the new arrival of Hilton's 175-room Hotel Resonance Taipei - burnished Taipei’s credentials as a cultural capital.

In the feature, Houston-based writer Dan Q. Dao said, the Taipei Performing Arts Center, defined by a giant silver sphere protruding from one side of the building, is a striking architecture that is seemingly set to become a city landmark when it opens in 2021. On the other hand, Hotel Resonance Taipei boasts a boxy black-and-white exterior designed to evoke frames on a film roll. Visitors looking for a respite from the fun and fast pace of the city can visit Yangmingshan National Park, which was named the World’s First Urban Quiet Park in June 2020, Dao added.

Other destinations on the list include Antarctica – "A rare sight at the South Pole," Beijing – "Action-packed metropolis," Lijiang – "A launch point for adventure," Tokyo – "Gearing up for the Games," and Gyeonju "Historic Gem."

The magazine said the challenges of the past year and a half have transformed the world, and few industries have been as affected as travel, tourism and hospitality. Thus, the list is a tribute to the people and businesses at the forefront of those industries that, amid extraordinary circumstances, found ways to adapt, build, and innovate.

To compile the list, TIME solicited nominations of places from its international network of correspondents and contributors, with an eye toward those offering new and exciting experiences.