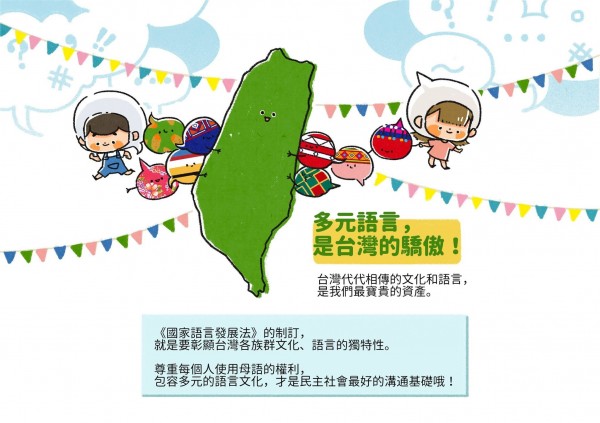 The Development Act of National Languages drafted by the Ministry of Culture was passed by the Executive Yuan on Jan. 4, and will now be submitted to the Legislative Yuan for review.

Taiwan has always been a diverse nation made up of different groups, but throughout the course of her history, the natural development of many languages were stunted and now face a crisis of inheritance.

The Ministry drafted the 17-section act to ensure the continuation and revitalization of all national languages, provide more opportunities for the usage of mother tongues, and protect the linguistic rights of all Taiwan people.

The six key points of the draft Development Act of National Languages are:

To define the national languages of Taiwan, including those used by residents of Taiwan proper, Penghu, Kinmen, Matsu, Green Island, Lanyu, and other offshore islands. Taiwanese Sign Language will also be included to protect the linguistic rights of hearing- and language-impaired citizens.

To formulate remedial and proactive measures to protect endangered languages, and encode such measures into law.

To establish a mechanism for conducting research and collecting data on Taiwan's national languages. Language input tools will also be refined and standardized to facilitate record-keeping and wide-spread usage.

To make national-language courses more readily available in pre-school, mandatory 12-year education, and higher education through curriculum expansion and the provision of teachers and learning materials.

To establish an accreditation program for national languages to reward language learners, boost civil service quality, and enhance the linguistic capabilities of Taiwan.

Linguistic diversity is part of Taiwan's cultural heritage, and the draft Development Act of National Languages proposes to allocate equal resources to spotlight the uniqueness of each language used in Taiwan. The full Chinese press release can be found here.