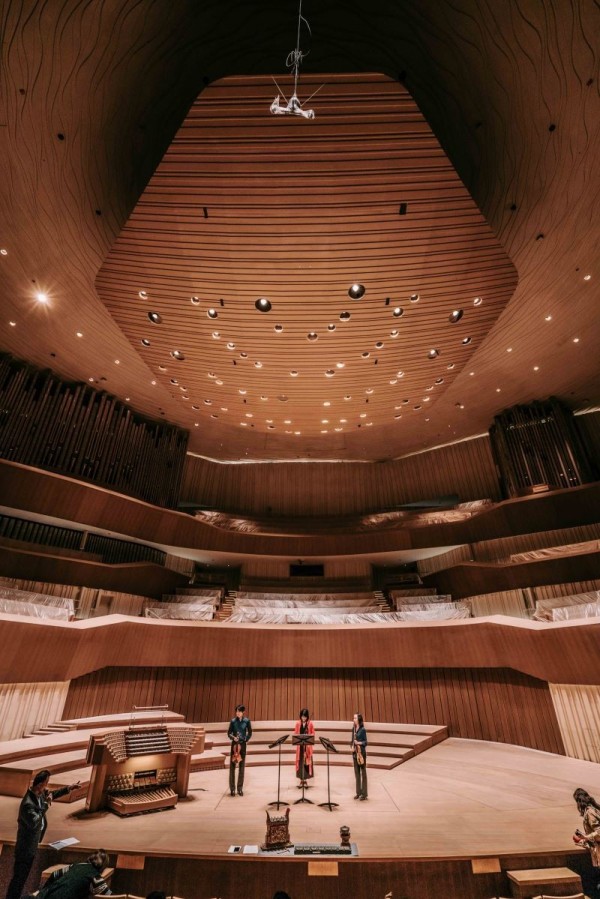 Twenty music students from elementary schools were invited to visit the newly constructed National Kaohsiung Center for the Arts to experience outstanding theater design and sound effects on Dec. 29.

The Center, which was previously known as Wei-Wu-Ying Center for the Arts, will open to the public in October as the largest theater for performances in Taiwan. Designed by Dutch architect Francine Houben, the Center comprises four venues: the Lyric Theater, Concert Hall, Playhouse, and Recital Hall.

The most-anticipated venue is the Concert Hall, which is Taiwan's first-ever venue that has a vineyard-style auditorium with serried rows. Such design shortens the distance of sound wave reflections to deliver the best acoustic experience while making audiences feel closer to the stage.

Produced by German manufacturer Johannes Klais Orgelbau, the pipe organ inside the Concert Hall is the largest one in Asia with 9,085 ranks of pipes. The specifications are the same as that of world-class venues Elbphilharmonie, Philharmonie de Paris, Berliner Philharmonie, Walt Disney Concert Hall, and Suntory Hall.

To introduce the Center to the public in southern Taiwan, the Center is partnering with the Education Bureau of Kaohsiung City Government to deepen music education through explaining acoustics and demonstrating string trios to visiting students.

Deputy Culture Minister Dr. Pierre Tzu-pao Yang (楊子葆), who accompanied the elementary students on Dec. 29, noted that the Center will offer world-class performances as well as serve as a leader in classical music education. Through vivid guided tours, children will gain a better understanding about music and science that will in turn fuel their imagination.

Violinists Chang Chun (張群) and Chen Ren-wei (陳人瑋) as well as violist Tomizawa Naoko (富澤直子) also gave a demonstration of high-quality acoustics and explained how the soundboard delivers the best sound according to different forms of performance on stage.

Chien expressed his hope of making the Center a place where children learning music would like to repeatedly visit. In addition to arranging and enjoying beautiful performances, Chien also hopes to perform in the Center and promote Taiwan culture on the world stage.