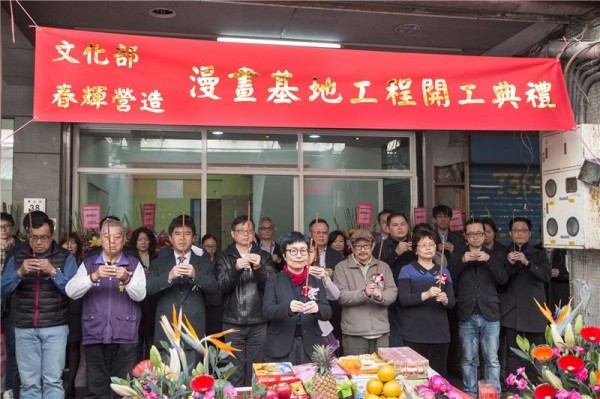 The Ministry of Culture inaugurated the renovation project of an old building in Taipei on Dec. 20 to transform it into the first comics base in Taiwan.

Comprising four floors, the comics base will display and sell original Taiwan comic products on first floor, use the second and third floors for holding exhibitions and events, and use the fourth floor for comic artists to create, interact, and cultivate assistants. The rooftop will also be converted into a garden for artists to rest and communicate.

Deputy Minister Celest Hsiao-ching Ting (丁曉菁) noted that the location of the base is close to the popular comics and animation district near Q Square and Taipei City Mall, adding that the Ministry's policy emphasizes on developing the whole comics industry in a comprehensive manner.

In addition to the comics base, the Ministry has also signed an MOU on establishing the National Comics Museum with the Taichung City Government this October. It is now actively soliciting historical documents, cultural relics, and manuscripts to preserve the valuable history of Taiwan comics.

Moreover, the Ministry will offer subsidies with the special budget given by the Forward-looking Infrastructure Development Program next year to allow comic artists to focus on creation. It will also support the interdisciplinary application of comics, such as transforming comic works into games and animation.

The Ministry hopes to provide a friendly environment and ample resources for comic artists and vitalize the industry through programs and systems supported by the government.

Commissioned by the Ministry, M.C. TSAI Architect & Associates will be responsible for designing the comic base while Chun Hui Construction (春輝營造) is in charge of renovations. The renovation work is expected to be completed by mid-2018. The selection process for an operational team is still ongoing.