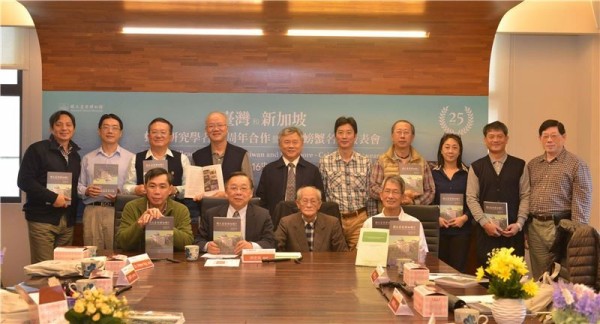 The National Taiwan Museum (NTM) launched a new edition of the "Annotated Checklist of Brachyuran Crabs from Taiwan (臺灣螃蟹名錄)” on Dec. 16 to keep the list up to date for research on crab biology.

The annotated list, which offers a comprehensive guide to the Taiwanese crab population, is a Taiwan-Singapore collaborative project initiated by Singaporean scholar Peter Ng in 1984. Since 1992, the research project has recorded 800 species of brachyuran crabs of Taiwan, which accounts for one-tenth of all related species in the world.

Released by NTM in 2001, the first annotated checklist of brachyuran crabs from Taiwan was a study conducted by Taiwanese scholars Wang Chia-hsing (王嘉祥), Shih Hsi-te (施習德), and Ho Ping-ho (何平合) with Singapore's Ng. The paper published a total of 560 species and has been cited 235 times.

In recent years, new species have been added by scholars from Australia, Germany, Japan, New Zealand, Singapore, and Taiwan. A molecular biology section was also introduced to expand upon the taxonomy of crabs.

The updated list, which records 800 crab species, is again based on research conducted by Wang, Shih, Ho, and Ng. Their work was inspired by the research published by Japanese scholar Horikawa Yasuich (崛川安市) in 1940 as well as the report by renowned geologist Lin Chao-chi (林朝棨) that was published in the Journal of the National Taiwan Museum in the following year.

NTM Director Hung Shih-yu (洪世佑) noted that child play involving the skillful capture of crabs was commonplace in earlier days. However, people then had no knowledge about the diversity of crustacean fauna in Taiwan.

Keeping the annotated list up to date is a process of establishing a scientific foundation that can help explore the connection among different species and their evolutionary track. With global biodiversity rapidly decimated nowadays, the annotated list embodies great significance and value, added Director Hung.

The establishment of "Annotated Checklist of Brachyuran Crabs from Taiwan” required tracing related literary and scientific reviews of Taiwanese crabs and evaluating the accuracy of their contents before official classification.

Dr. Yu Hsiang-ping (游祥平), a fisheries science expert, wryly noted that the crab-recording process was often disrupted by coast guards. He then stated his hopes for future scholars of crab biology to publish photographic guides to Taiwanese crabs.

Additional forums, featuring experts exploring issues pertaining to crab biodiversity and conservation in Taiwan, will be held next year on Jan. 1, Feb. 11, and March 4 at the Taipei-based museum.