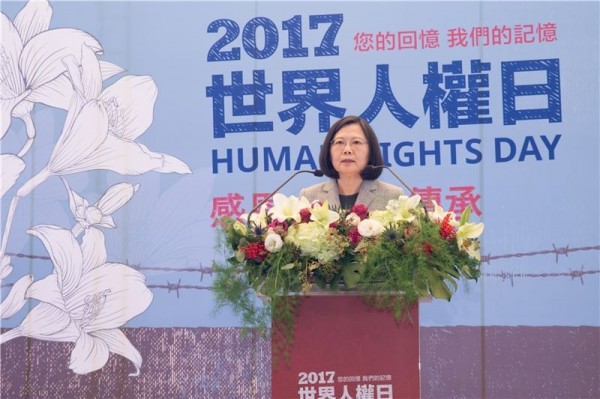 The Ministry of Culture held an International Human Rights Day ceremony at the Taipei Guest House on Dec. 10 to commemorate political victims and promote the deepening of democracy.

Attended by President Tsai Ing-wen and 150 political victims, the ceremony paid tribute to those who fought for Taiwan's democracy, including politician and historian Hsu Shih-kai (許世楷), who was blacklisted after trying to rescue Taiwanese political dissidents in Japan.

During the event, President Tsai presented a certificate to family members of political victim Kuo Chao (郭朝) to restore his reputation. Certificates of appreciation were also given to political victim Kuo Zhen-chun (郭振純) and Huang Qiu-shuang (黃秋爽) for their donation of cultural relics to the newly established National Human Rights Museum.

President Tsai stated that Taiwan is entering a new chapter of democracy, noting that the government has just passed both the Implementation Act for Transitional Justiceand the National Human Rights Museum Act. The government invites everyone to participate in the implementation of transitional justice and create dialogue for reconciliation, she added.

"Tell the truth, clarify responsibilities, and embrace reconciliation .... The Taiwanese people have to face history, fortify democracy, and move forward to the future together,” stated President Tsai as she quoted the late political victim Chen Meng-he (陳孟和) to stress the importance of transitional justice.

Minister Cheng thanked the Legislative Yuan for passing the National Human Rights Museum Act and the Implementation Act for Transitional Justice, and pointed out that the museum will be the institution that researches the history of Taiwan under martial law, promotes human rights education, and looks after historical sites of injustice and negative heritage.

Political victim Ho Ying-hong (何穎紅) thanked President Tsai and Minister Cheng for their attendance of White Terror memorial events every year, and shared the story of his father who sacrificed his life in pursuit of human rights.

Director Chen Chun-hung (陳俊宏) of the Preparatory Office of the National Human Rights Museum noted that activities such as exhibitions, markets, forums, and guided tours are also being held at Jing-Mei park on Human Rights Day to promote the universal values of human rights.