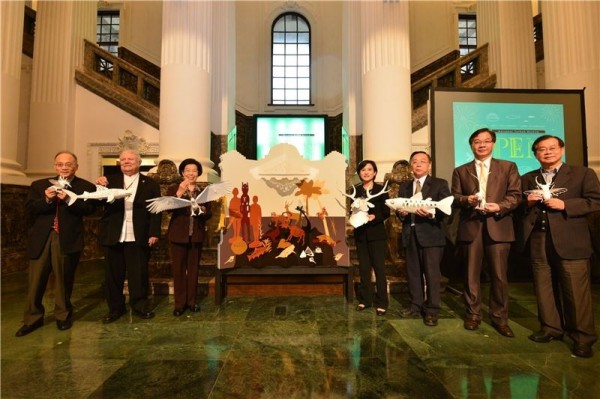 The National Taiwan Museum, a national heritage site dating back to 1908, formally reopened its doors on Nov. 20 after a two-month project on restoring its original visage and upgrading its exhibition capabilities.

This marks the museum's fourth full-scale renovation in almost 110 years. The first closed-door renovation in 1961 was held to meet building requirements stipulated by martial law, in which the south-facing balcony corridor was changed into an indoor room; while the second renovation in 1994 transformed the building's third floor into more public display space in response to growing cultural participation and interest.

The third renovation, which was held after damage sustained from the March 31 earthquake of 2001, ran into similar difficulties faced by this year's renovation team. As Culture Minister Cheng Li-chiun noted, the hardest challenge isn't to just restore the building's original façade, but to replicate the process used by architects, floor builders, and roof tilers from a century ago.

As many of the early techniques have been lost in Taiwan, the National Taiwan Museum researched similar case studies from Japan, Italy, and the United Kingdom and adapted the practices using local materials before applying the relearned techniques to the restoration process.

To reflect the museum's background as Taiwan's first-ever natural science institution, the National Taiwan Museum also used the two-month break to curate a new permanent display and two special presentations that each reflect a unique aspect of Taiwan's natural history.

As the first installment of a new trilogy of permanent displays, "Discovering Taiwan” traces the golden age of scientific discovery on Taiwan and the emergence of naturalists specializing in Formosan species. Visitors will be able to see how the mysteries of Taiwan's natural world became a topic of interest to adventurers around the globe.

To unravel the timeline of discovery, this section offers 367 specimens and artifacts, of which 265 objects are from the museum's own collection, including the now-extinct Formosan clouded leopard, the rare milky white mineral Hokutolite, and prehistoric fossils known as Hayasaka's rhinoceros.

The two special exhibitions are respectively dedicated to the enigmatic flying insects of Taiwan and the centennial anniversary of revival efforts towards bringing back the endangered Formosan Landlocked Salmon.

Designated as a national heritage site in 1998, the National Taiwan Museum is located within the 228 Memorial Park in Taipei City. Drop by for a glimpse of the museum's magnificent architecture and a tour of Taiwan's natural wonders. Click here for information on foreign-language guided tours offered by the museum.