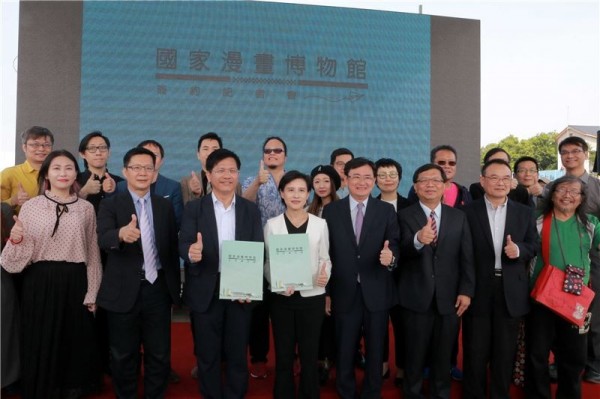 Culture Minister Cheng Li-chiun signed a memorandum of understanding with Taichung City Mayor Lin Chia-lung (林佳龍) on Oct. 28 to pool together resources for the preservation, display, and promotion of Taiwan's original comics.

The National Comics Museum is scheduled to be established in 2020 to promote Taiwanese comics as well as preserve and revitalize related artifacts and documents.

Minister Cheng noted that the comics format is a crucial cultural medium for it embodies imagery, text, and storyline. Thus, one of the Ministry's policies on comics is to construct archives and promote added-value applications of related historical documents.

Preparation work for museum facilities and personnel recruitment are now underway to create a long-term home for preserving and displaying Taiwan's comics. The Ministry will also assist the Taichung City Government in organizing related events and promote the local comics industry, the Minister added.

The Ministry is also conducting surveys and research projects to collect information related to comics across Taiwan, and calls for submission or donation of historical documents to delineate the full history of Taiwanese comics.

In addition, the Ministry will cooperate and share resources with local institutions that preserve such historical documents and Taiwanese comics. The National Chiao Tung University, for example, is recognized for its long-term commitment to digitizing original scripts and maintaining a sizeable Taiwanese comics archive.

Moreover, the museum will incorporate augmented and virtual reality technologies to transform historical documents into interactive exhibitions and share its digital resources with users from around the world.

Minister Cheng also thanked the Taichung City Government for providing the land and facilities that made the establishment of the National Comics Museum possible in Taichung.