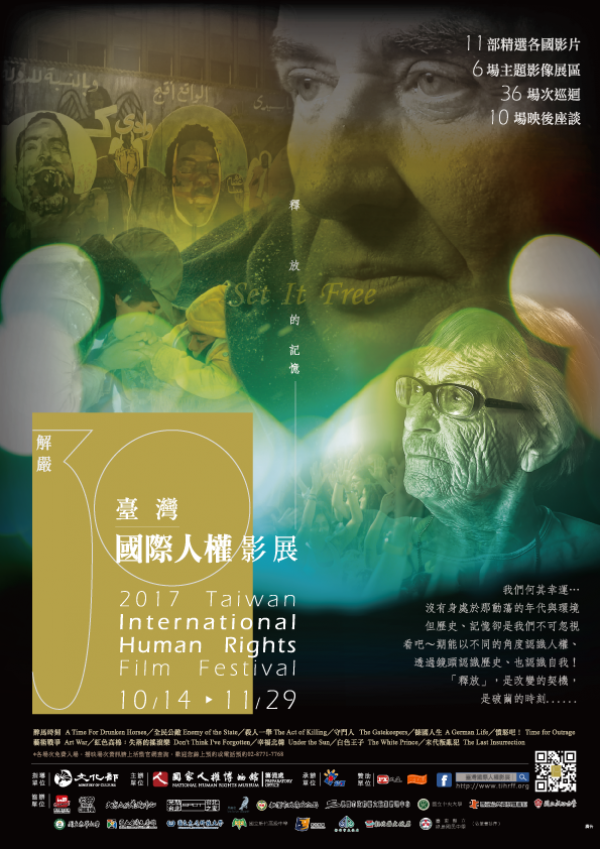 The inaugural Taiwan International Human Rights Film Festival, which is the third installment of nation-wide events raising awareness of the nation's authoritarian past, will screen nine foreign films and two Taiwanese films in three categories - "Political Effect,” "Ideological Revolution,” and "The Voice of Arts and Culture.”

Starting on Oct. 14, the program will kick off in Taipei and then travel to 18 venues across 12 Taiwanese cities and counties, encompassing 36 film screenings and 10 post-screening forums before concluding on Nov. 29.

An accompanying visual exhibition will also be staged in Taipei, Taoyuan, Hsinchu, Taichung, Changhua, and Tainan to provide more detailed information on life in Taiwan under martial law.

At the Oct. 14 opening ceremony, Taiwanese movie producer Angelika Wang (王耿瑜) noted that "a nation without [its own] documentaries is like a nation without a photo album.”

Tchen Yu-chiou (陳郁秀), chairman of Taiwan's Public Television Service, added that the nation's citizens have the right to interpret the historic events under martial law in their own manner.

Deputy Culture Minister Celest Hsiao-ching Ting (丁曉菁) also expressed her support for the educational duties of the upcoming National Human Rights Museum, which may be formally established before the end of this year.

The primary mission of the upcoming National Human Rights Museum will be to publish the historical truth - a task that entails the organization, investigation, and research of files from the White Terror era (1949 - 1987).

The museum will establish a management system for preserving such records and sharing key findings with members of the public while ensuring the protection of privacy when the White Terror files are made publicly available.

The full lineup and schedule of the 2017 Taiwan International Human Rights Film Festival can be found at: http://www.tihrff.org/.