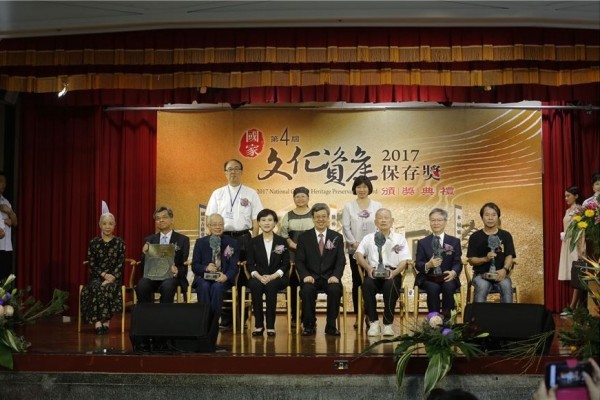 The ceremony for the 4th National Cultural Heritage Preservation Awards was held at the Taichung Cultural and Creative Industries Park on Sept. 16, in which Vice President Chen Chien-jen (陳建仁) presented awards to the five winners in recognition of their achievements in preserving Taiwan's cultural heritage.

Culture Minister Cheng Li-chiun paid homage to the winners at the Sept. 16 ceremony, noting that preserving cultural heritage is a form of respect to the land and accumulated knowledge, and the building blocks of a national cultural identity.

The governance of cultural assets not only preserves memories of the past and present, but helps to explore the future. By holding the ceremony on Taiwan's National Heritage Day, the Ministry of Culture hopes to pass down the spirit of preservation and rally local governments and the public in jointly preserving and valuing such assets, added Minister Cheng.

Wang, the only winner in the intangible cultural heritage category, is a 90-year-old paper cut-and-paste artist. Wang has dedicated his life to creating paper artworks, and started holding workshops in recent years to pass down such cultural heritage.

Kimura, a Japanese scholar who has participated in several research and preservation projects on Taiwan's national heritage sites, is the first-ever foreign-national recipient of the Preservation Contribution Award.

Chen, the second recipient of this year's Preservation Contribution Award alongside Kimura, is a scholar who has spent three decades in conducting excavations and archaeological research on Taiwan's archaeological sites. He continues today, even when he is over 80 years old.

During his field studies, Chen discovered a tomb on Liang Islet of the Matsu Islands. One of the skeletons, which are among the earliest and most intact remains to be found in Taiwan, can be dated back to 8,300 years ago. It is also the earliest Neolithic skeleton to be discovered in the Min River region. The finding has helped scholars to trace the history of Matsu Islands back to 8,300 years ago.

The skeletons found on Liang Islet were later proven to be the earliest Austronesian remains ever found. Genetic materials matched the Liang Islanders to later Austronesian groups who moved to Taiwan proper, the Philippines, and other islands in the Asia-Pacific region.

The third winner of the Preservation Contribution Award is the Daerjie Cultural Foundation, the first organization of its kind in Yilan to be honored in such manner. The foundation developed a way to empower the community by elevating local resident participation and community autonomy.

In addition, the foundation promotes cultural heritage preservation and space revitalization through community building, and has achieved great results in the reutilization of cultural assets.

The Tainan Judicial Museum, winner of the preservation and maintenance category, is a historical building that was built in 1914. Along with the Presidential Office Building and the National Taiwan Museum, it is one of the three classical architecture projects completed during the Japanese colonial period.

As the only existing judicial building that was constructed during the Japanese era in Taiwan, the restoration preserves the original look and style, making it an outstanding example of a publicly funded restoration project. The restored building has become a new cultural landmark in Tainan, and it will be turned into a judicial museum in the near future.

To highlight the characteristics of traditional performing arts, which are another form of cultural heritage, the awards ceremony invited Paiwan nose flute master Gilegilau Pavalius (謝水能) and his disciples to present a sublime flute performance.

Two disciples of Taiwanese opera virtuoso Liao Chiung-chih (廖瓊枝) were also invited to present "Shanbo and Yingtai's Trip to West Lake (山伯英台-遊西湖),” in which rhyming couplets were incorporated to introduce the award winners this year.

One of Liao's disciples Chang Meng-yi (張孟逸) has recently garnered the Best Actress Award at this year's Golden Melody Awards for Traditional Arts and Music, etching a milestone in the intangible heritage preservation project the Ministry initiated in 2010.

The National Culture Heritage Preservation Award was established in 2009 to promote and highlight significant contributions by individuals or organizations in preserving the nation's tangible and intangible cultural heritage.

This year, a special exhibition will also be held to showcase artworks, manuscripts, and trade tools of the award winners as well as unique features of the Tainan Judicial Museum. More information on the upcoming exhibition at the Taichung Cultural and Creative Industries Park will soon be announced.