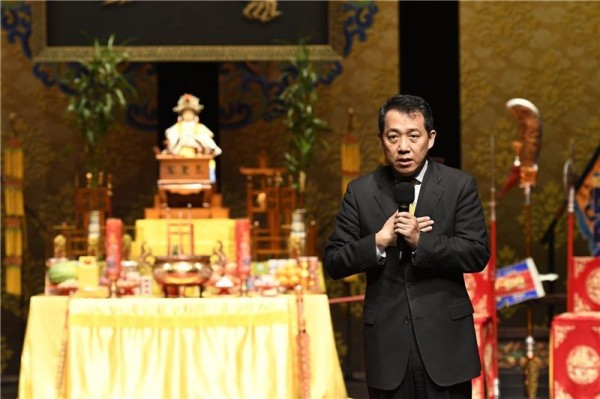 The GuoGuang Opera Company (國光劇團) held a ceremony on Sept. 12 to officially place the Patriarch Emperor Xuanzong of Tang, which was temporarily stored at a storage room, in the main hall of the Xiqu Center of Taiwan.

Emperor Xuanzong of Tang, who founded the Pear Garden royal acting and musical academy in China, is the primary deity worshipped by Peking opera artists. Since the establishment of the GuoGuang Opera Company in 1995, the troupe has hailed the Patriarch of Pear Garden through an elaborate ritual and carefully placed it at the backstage of the National Center for Traditional Arts in Yilan.

Since then, a ritual is held by the opera troupe at the end of every year and the beginning of a new year to pass down the traditional rites of Pear Garden. Following the establishment of the Xiqu Center of Taiwan in Taipei, the Patriarch and opera troupe have moved to the new base of opera.

Deputy Minister Yang pointed out that the GuoGuang Opera Company's worship of the Patriarch of Pear Garden is a valuable cultural tradition, and that the Ministry of Culture offers its full support to the preservation of such tradition.

The traditional performing arts community in China has expressed its admiration for Taiwan for preserving the worship of traditional trade deities, such as Lu Ban (魯班) in the crafts industry, and Lord Xi Qin (西秦王爺), Marshal Tien Tu (田都元帥), and Meng Fu (孟府郎君) among traditional performers, added Yang.

During the ceremony, the statue was moved to the stage in the main performance hall, with the whole opera troupe, including Wei Hai-min (魏海敏), Tan Wen-hua (唐文華) and Wen Yu-hang (溫宇航), presenting "Exorcism by Zhong Kui (鍾馗除煞)” and "Deities Sending Congratulations (群仙獻賀)” to welcome the deity.

Situated on the old site of the original Taipei American School, the Xiqu Center of Taiwan began construction in 2012 and received its permits last year. It will be officially inaugurated on Oct. 3 to coincide with the opening of the 2017 Asia Pacific Traditional Arts Festival.

As the first professional theater stationed with performance groups, the Xiqu Center of Taiwan will serve as a base for developing Taiwan's traditional performing arts upon inauguration. With the Patriarch of Pear Garden residing at the center, it also symbolizes Taiwan's respect for traditional culture.