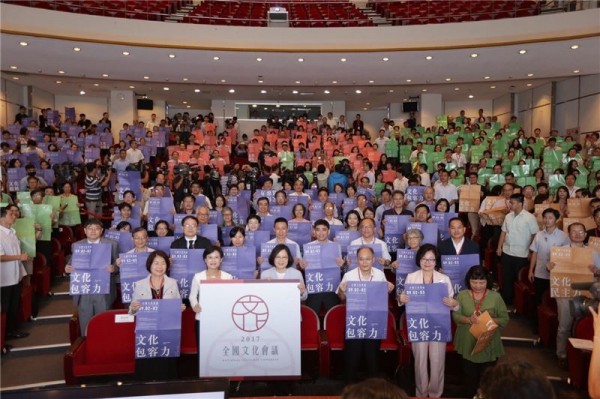 The Ministry of Culture kicked off the first segment of the two-day 2017 National Cultural Congress at the Civil Service Development Institute on Sept. 2 to examine and discuss six main cultural governance issues with the public.

The Ministry noted that the conference will bring together public consensus through a bottom-up approach, and Minister Cheng Li-chiun will respond to the gathered information when the conference ends on the next day.

The forum reviewed the Law for the Development of the Cultural and Creative Industries and explored methods on making Taiwan’s original culture the foundation for promoting cultural and creative industries. Moreover, it concluded that cultural industries require interdisciplinary collaboration between different sectors and industries to bring in frameworks and talents of international marketing, intellectual property, and financing.

The forum also pointed out that talent incubators should not rely solely on schools but should integrate and utilize resources from private sectors and society as well. It suggested that the Ministry of Culture should cooperate with the Ministry of Education in fostering arts and culture and strengthening art education.

The forum on Cultural Tolerance was hosted by Principal Chen Chih-cheng (陳志誠) of the National Taiwan University of the Arts with Culture Deputy Minister Dr. Pierre Tzu-pao Yang (楊子葆) explaining the policy. It pointed out the lack of cultural policies dedicated to young people and the problem of defining youth culture such as gaming and comics with an adult’s perspective. Then it suggested understanding the needs of youth culture and enhancing its contents by devoting more education to culture.

The draft Development Act of National Languages was discussed in the forum. The public looks to revitalize mother tongues and pass down such cultural heritage through mother-tongue education and mass communication channels such as radio programs or TV stations dedicated to specific languages.

Hosted by Lin Fu-shih (林富士) of Academia Sinica Center for Digital Cultures with policy explained by Culture Deputy Minister Ting, the Cultural Transcendence forum discussed the cultural applications of technology and science, which require improvement in the local education system to meet the demands of the global cyber era. The public suggested that the development of cultural technology should start with education, which will allow students to learn the creativity of digital technology and strengthen interdisciplinary studies.

Furthermore, the public expects the Ministry’s cultural laboratory project to serve as a role model. By offering young people stationed in the laboratory the chance to cooperate with local governments, the cultural laboratory is expected to form a national network for facilitating local development of cultural technology.

The Cultural Vitality forum was hosted by Professor Lin Chong-hsi (林崇熙) with Deputy Minster Yang explaining the policy. The public suggested adding cultural heritage preservation education to academic curriculum and making the examination of cultural assets public. The selection, position, and withdrawal of advisory committees, however, should be applied with higher standards of inspection.

Regarding cultural heritage evaluation, the forum participants noted that the central government should have measures in response to the identification of potential problems. Also, they pointed out the mechanism of reimbursement for owners of privately owned historical buildings should be well planned once the buildings are designated as cultural heritage sites.

In the Cultural Democracy forum hosted by CEO Peng Chun-heng (彭俊亨) of the National Culture and Arts Foundation and joined by Culture Vice Minister Lee Lien-chuan (李連權), the public called for holding regular cultural forums like the island-wide series organized by the Ministry throughout this year to allow more public participation in cultural affairs.

The first day of the two-day National Cultural Congress ended with the public expressing their hopes of turning discussion results into real policies, increasing the budget for culture in the future, and reviewing the budget allocation in each field.