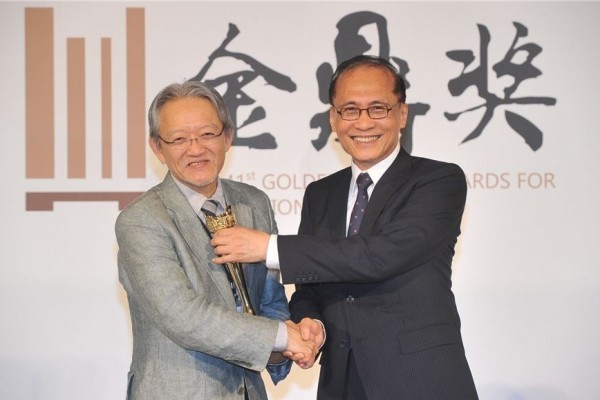 The 41st Golden Tripod Awards presented 19 prizes to 29 finalists from the categories of magazines, books, and digital publications, and named an additional 29 works as excellent publications on Aug. 15.

This year, the Special Contribution Award went to Kuo Chung-hsing (郭重興), founder of the Book Republic Publishing Group (讀書共和國). Kuo received the award from Premier Lin Chuan (林全), who praised Kuo's dedication to publishing quality works in Taiwan, including the development of diverse publications, establishment of a free and liberal platform for editors, and the integration of various publishing companies to form a united group.

When Kuo received the prize, the first phrase he said was "heavy (is the trophy),” in an expression of the burden of responsibility he feels in his quest to enhance Taiwan's publishing industry. Kuo noted that deepening the public's habit of reading will provide hope for Taiwan's future as reading widely and more frequently will help enhance one's self-awareness.

Kuo then thanked everyone for recognizing the publisher's role in fostering editors and cooperating with editorial teams, and expressed his hope for more publishers to focus on the essence of their jobs by nurturing more talented editors, who in turn will improve reading habits.

Culture Minister Cheng Li-chiun noted that though Taiwan is a small island with a relatively young society that has just embraced democracy, the vitality of Taiwan's prosperous culture and ideas are thanks to creators and publishers.

Despite the declining output of the local publishing industry, the number of admissions and sales of the Taipei International Book Fair were at record high this year. The World Book Day events organized by the Ministry of Culture had also promoted reading by creating a network of bookstores across Taiwan. Moreover, publication sales have risen slightly this year, which show the positive effect of these efforts, added the Minister.

To boost the visibility of Taiwan's quality publications, the Golden Tripod Awards will work towards strengthening its publicity campaign this year. In addition to presenting authors' ideas and speeches through videos and interviews, nationwide forums featuring winning authors and their works are launched right after announcing the list of winners.

A total of eight forums featuring the winning works will be held in northern, central, southern, and eastern Taiwan starting on Sept. 15 to promote this year's laureates and encourage more people to read.