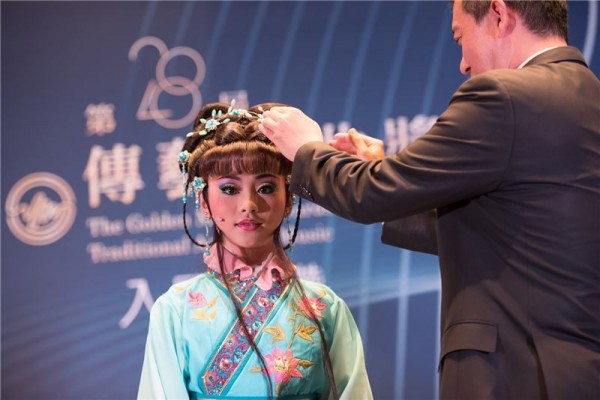 Nominees of the 28th Golden Melody Awards for Traditional Arts and Music were applauded for their achievements and contributions to Taiwan's music heritage at the "Applaud the Nominees!” event held at the Xiqu Center of Taiwan on Aug. 5.

The Golden Melody Awards for Traditional Arts and Music is organized by the National Center for Traditional Arts to recognize advancement and preservation of the nation's heritage. To reflect that mission, "Heritage and Dialogue” was chosen to be this year's theme to highlight the importance of safeguarding traditional classics.

Opera actress Liao Chiung-chih, who is officially recognized as a "national living treasure,” and Deputy Culture Minister Pierre Tzu-pao Yang were invited to partake in a ceremony at the event, in which every stroke of makeup she painted and every headdress he helped place upon the heads of a new generation of artists symbolized an endless succession of blessings and inheritance.

Deputy Minister Yang noted that the traditional Golden Melody Awards was launched to connect different cultures in Taiwan and combine the musical vocabulary of the East with that of the West. As the Awards continues to forge ahead on a path towards having more progressive contemporary significance, the Ministry of Culture will continue to incubate new talent, encourage original creation, and preserve all aspects of traditional music and art to construct a better environment for the development of art, music, and drama in Taiwan.

A total of 118 companies, including 77 publishing houses and 41 performance troupes, submitted 1,098 entries - 1,004 in the publishing category and 94 in the performance category - to this year's Golden Melody Awards for Traditional Arts and Music. Sixty-three submissions were shortlisted for the Awards after three months of deliberation by the judge panel.

Compared to last year, submissions to the publishing category have increased by over 35%, reflecting a steady trend of growth in the traditional arts field despite the overall downturn of the local publishing market. The number of entries in the performance category, however, have decreased slightly. Competition remains fierce as all entries are of exceeding quality.

The winners will be formally announced at the awards ceremony hosted by the National Taiwan University of Arts on Aug. 26. Tune in at 7pm on the CTS Education and Culture (華視教育文化台) channel.