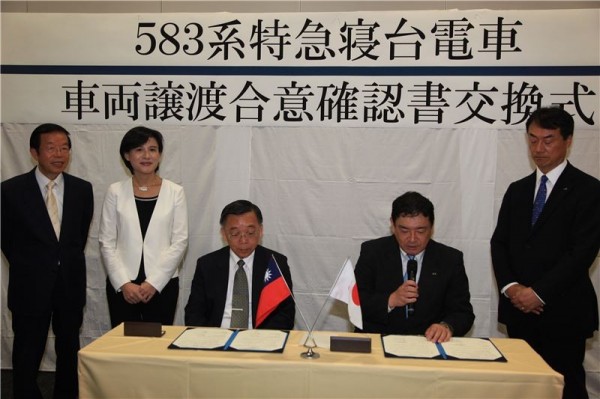 The East Japan Railway Company donated two railway passenger cars from its 583 series - better known as "The World's First Sleeper EMU” - to the National Taiwan Museum at an Aug. 1 ceremony held at the Railway Museum in Saitama, Japan. The sleepers will greet the public once the Taipei Railway Workshop reopens as Taiwan's National Railway Museum.

Culture Minister Cheng Li-chiun, who flew to Japan to attend the ceremony, noted that Taiwan and Japan are neighbors who share a close-knitted railway history, including the employment of same railway gauges.

She noted that the Taiwan Railway Administration had a set of passenger cars similar in gauge and interior to the JR-EAST 583 series, but they were dismantled at the Taipei Railway Workshop twenty-two years ago after decommission.

Minister Cheng stressed that the donation of the 583 series will help the iconic sleeper EMU (electric multiple unit) be represented at the Taipei Railway Workshop and complete the portrayal of Taiwan's locomotive history and heritage.

Taiwan has over a hundred railway-related cultural landscapes and sites today, and the island's 130-year-old train history will be fully preserved by two upcoming museums - the Taipei Railway Workshop and the Railway Division of Taiwan Governor-General's Bureau of Transportation.

The Ministry of Culture is also working with Saitama's Railway Museum to deepen Taiwan-Japan ties through railway exchanges.

The Taiwan Railway Administration began providing sleeper trains in first-, second-, and third-division passenger cars in 1922, and upgraded the construction of sleeping cars from wood to steel in the 1960s. Advancements in technology greatly shortened the travel time between north and south and led to the decommissioning of TRA sleeper cars in 1982. All passenger cars from the West Coast Line sleeper trains were dismantled in 1995.

The Taipei Railway Workshop opened in 1935 under Japanese rule. As a major railway maintenance, assembly, and repair site, it is the largest and oldest of its kind in Taiwan. The facilities maintain mainly the same original design from the 1930s, an era where architecture and space strived for modernism and functionality. It is the designated site of the upcoming National Railway Museum.