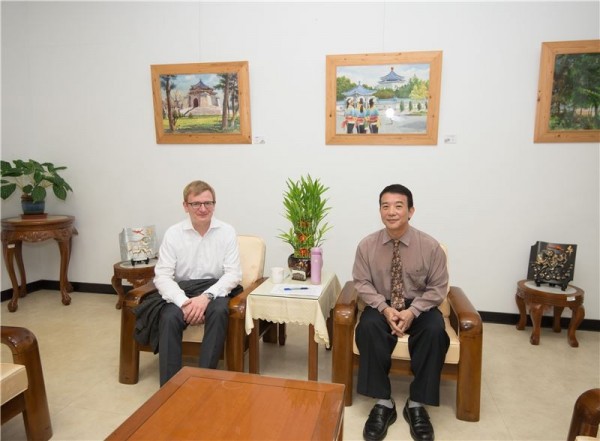 The Ministry of Culture hosted Dr. Philipp Lengsfeld, member of the German Parliament,during his July 4-8 visit to Taiwan upon the 30th anniversary of the lifting of martial law.

As 2017 also marks the 70th anniversary of the February 28 Incident, the Ministry arranged visits to a couple of venues related to the subject of transitional justice for Dr. Lengsfeld.

Dr. Lengsfeld made his first stop at the National Chiang Kai-shek Memorial Hall on July 6 to learn about the initial reasons for its establishment as well as its current facilities and exhibitions.

Director Lin Jin-sheng (林進盛) of the CKS Memorial Hall explained that the transformation of the memorial hall does not intend to erase memories of the late Chiang Kai-shek but rather aims to remove the vestiges of authoritarianism.

The implementation of transitional justice also includes the restoration of historical truths, clarification of responsibilities, redress of grievances, and compensation. The memorial hall will also cooperate with the government and private sectors to highlight human rights education to achieve social reconciliation, added Lin.

In addition, Lin asked Dr. Lengsfeld about Germany's experience with transitional justice, such as how Germany conducted diverse dialogues and constructed social consensus after reunification; and how Germany used what it has learned from its history to strengthen the younger generation's awareness of civil society and human rights.

As someone who grew up in East Germany and a current member of the pro-Taiwan faction in the German Parliament, Dr. Lengsfeld exchanged his knowledge of politics and civil society with Lin and shared his opinions regarding the issues raised by Lin.

Through an interpreter, Dr. Lengsfeld listened quietly to understand their pain and hardships as a political dissident in martial-ruled Taiwan.

Dr. Lengfeld also visited affiliated institutions of the Ministry of Culture, Taiwan Foundation for Democracy, and Dadaocheng - the latter of which is a historical Taipei district where the February 28 Incident began in 1947.

Dr. Lengsfeld's timely visit will not only help the Ministry with realizing transitional justice but also deepen cultural exchanges between Taiwan and Germany and create future collaboration opportunities.