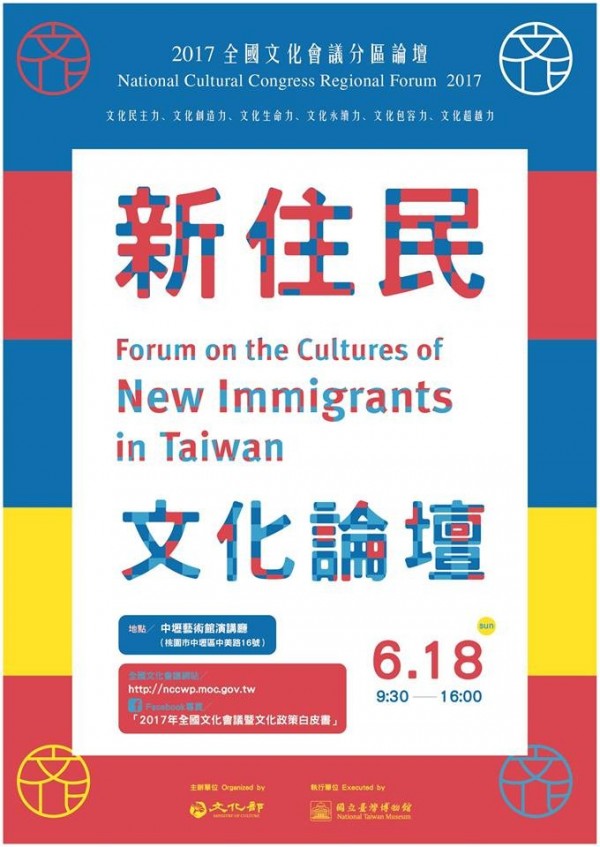 The Ministry of Culture hosted an open forum exploring cultural participation and the cultural rights of Taiwan's new immigrants at Taoyuan's Zhongli Arts Hall on June 18.

Deputy Minister Yang noted that as part of the 2017 National Cultural Congress program, Sunday's forum was significant for the general public to learn more about how new immigrants have enriched Taiwan society.

The Ministry has been working to establish the Culture Basic Law, which aims to protect equal cultural rights and access to culture for all individuals, including new immigrants, added Deputy Minister Yang.

Legislator Apollo Chen (陳學聖) also noted that many problems concerning the lives of new immigrants in Taiwan have been solved by concerted efforts between the Ministry of Culture and the Executive Yuan over the years.

However, most new immigrants and migrant workers have no right to vote, and their cultural rights become increasingly neglected by local governments. Thus, Chen hoped the forum will serve as a starting point for people to learn all aspects of the lives of new immigrants in Taiwan.

Titled "The Past and Present of New Immigrants,” the first session was hosted by Chang Cheng (張正), founder of Southeast Asia-themed bookstore Brilliant Time, to discuss issues encompassing government policy on new immigrants and tolerance in society.

During the forum, audience members also highlighted the current situation of being stereotyped and labeled, called for society to embrace inclusivity, and proposed several methods for Taiwanese people to learn more about Southeast Asian cultures.

The Ministry of Culture noted such forums are incredibly important platforms for gathering information and advice from new immigrants, and promised to use feedback from the June 18 forum as reference for future cultural policymaking and revisions of the draft Culture Basic Law.