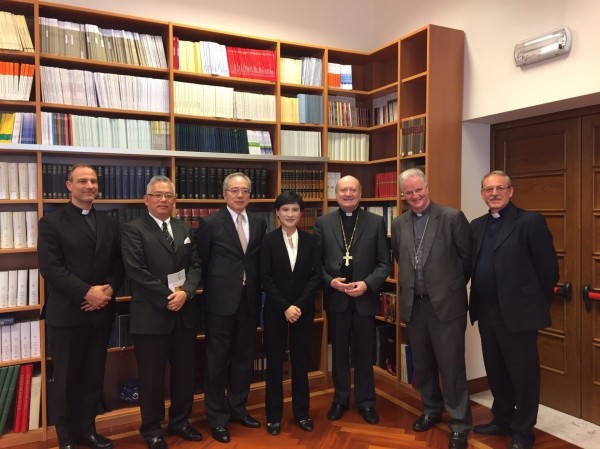 Culture Minister Cheng Li-chiun paid a visit to President Cardinal Gianfranco Ravasi of the Pontifical Council for Culture on May 10 during her trip to Vatican City.

The visit was to thank the Roman Catholic Church for its contributions to Taiwan's society, medical care, and education, as well as to invite President Ravasi, who has been actively promoting religion and contemporary art, to visit Taiwan.

Minister Cheng first visited the St. Peter's Basilica and the Vatican Gardens with Ambassador Matthew S. Lee (李世明) of the Embassy of the Republic of China to the Holy See and Padre Giovanni Chiu (邱琮傑) in the morning.

In addition to serving on the Pontifical Council for Culture, Ravasi is also President of the Pontifical Commission of Sacred Archaeology, which is responsible for preserving, maintaining, and conducting research on the important cultural relics and monuments of the Catholic Church.

Minister Cheng noted that the history of the Catholic Church in Taiwan can be traced back to more than 160 years ago. It had erected three historical monuments and sixteen historical sites, and sent more than 2,000 priests and nuns to Taiwan during the past century.

The Ministry is now pushing forward the "Re-creating Historical Scenes” project to establish a more engaging framework for managing cultural assets and culture, and hopes to host dialogues on culture preservation with the Catholic Church in the future, added Minister Cheng.

In response, President Ravasi shared how the Catholic Church re-established collective memories by preserving history, records, and cultural relics, and expressed faith in the Catholic Church's willingness to assist Taiwan with preserving Taiwan's traditional culture and cultivating talents in that field.

In addition, President Ravasi introduced Minister Cheng to a couple of institutions with the potential for establishing deep partnerships with Taiwan, and stated his hopes for the Catholic Church and Taiwan to conduct further cultural exchanges in the future.

When Minister Cheng complemented President Ravasi's Twitter account for having more than 70,000 followers, President Ravasi noted that by using social networks, he hopes to encourage young people to participate in science, technology, and sport issues.

At the end of the meeting, Minister Cheng presented two gifts - the blueprint of St. Joseph Technical High School, which was established by a Catholic priest to promote education in a remote area of Taiwan, and a blueprint of another Catholic building collected by the National Taiwan Museum - to President Ravasi.

The Minister is scheduled to fly to Italy and attend the opening of the Taiwan Pavilion at the 57th Venice Biennale on May 13. Follow @CulturalTaiwan on Twitter for more timely updates.