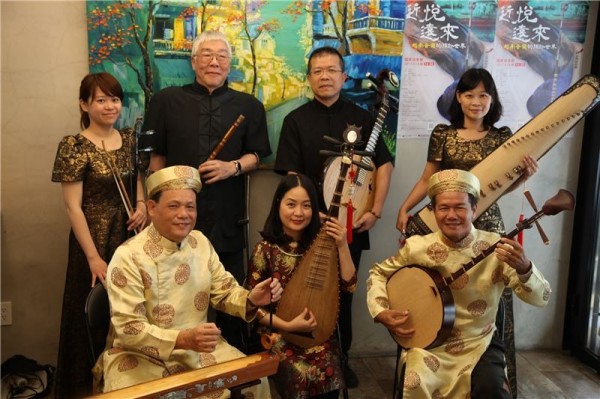 Upholding the spirit of "connecting Taiwan with the world through music,” the National Chinese Orchestra Taiwan (NCO) will share the joy of Vietnamese music along with three maestros from Vietnam in an unprecedented joint concert on May 14 at the National Concert Hall.

For the May 14 performance, Professor Pham will lead the tally card song recitals, which are recognized as part of Vietnam's intangible cultural heritage by UNESCO. Her rendition of classics such as "The Song of a Pipa Player” will be accompanied by Professor Wang on the lute and NCO's Fan Cheng-liang (范程量) on the drums.

Professor Đỗ will then demonstrate Vietnamese zither songs in the vein of đờn ca tài tử - literally "music and song of the amateurs” - that has been a long-popular form of musical entertainment for all levels in society. Moreover, a Chinese orchestral version of the traditional monochord zither tune "The Bridge of Hometown” will also be specially performed at the May 14 concert.

A workshop will be hold prior to the concert for NCO members to experience traditional instruments such as the Vietnamese pipa, Vietnamese moon zither, long zither, monochord zither, and coin clapper. Further meaningful exchanges of culture will be realized through commissions such as "The Bright South,” which was written by veteran composer Lai Deh-ho (賴德和) as a trio concerto for the NCO using Vietnam's moon zither, monochord zither, and pipa.