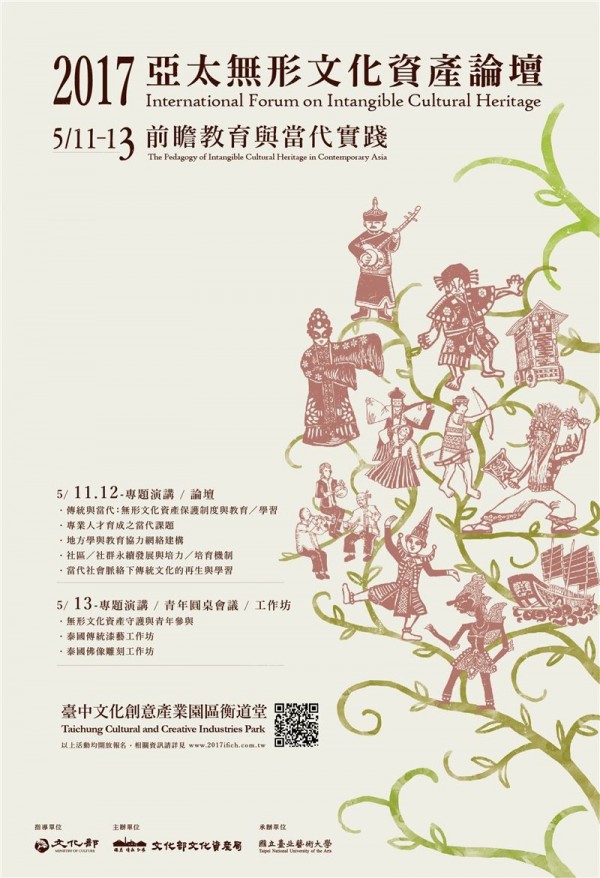 The International Forum on Intangible Cultural Heritage will take place from May 11 through 13 in Taichung City to discuss the pedagogy of intangible cultural heritage in contemporary Asia.

The Convention for the Safeguarding of Intangible Cultural Heritage adopted by UNESCO has established new prospects and methodology for the safeguarding of such assets. Its methodology emphasizes interpreting intangible cultural heritage and re-introducing them to the public through a contemporary context.

Education is key to the sustainability of intangible cultural heritage. Therefore, through transnational dialogue, the Convention hopes to gather new practices that evoke public interest in cultural diversity and preservation, and new educational formats that foster research capabilities and professional talents in conservation and interpretation.

The main objectives of the forum are to formulate a protective network involving state authorities, researchers, and communities; a mechanism for transmitting professional and specialized knowledge; a framework for partnering with local communities; a platform for regional empowerment and involvement; and a set of guidelines for heritage interpretation that balances contemporary engagement with authenticity.

The forum will be accompanied by three keynote speakers - Shy Kwo-long (施國隆), director-general of the Ministry of Culture's Bureau of Cultural Heritage; Wataru Iwamoto (岩本涉), director-general of the International Research Center for Intangible Cultural Heritage in the Asia-Pacific Region (IRCI) of UNESCO, Japan; and Angela Srisomwongwathana, co-founder of the Little People in Conservation Group based in Thailand.

Fringe events on Thai heritage - including traditional Lanna dance, decorative lacquer crafts, and traditional wood-carving workshops - will be held alongside the forum at the Taichung Cultural and Creative Industries Park.