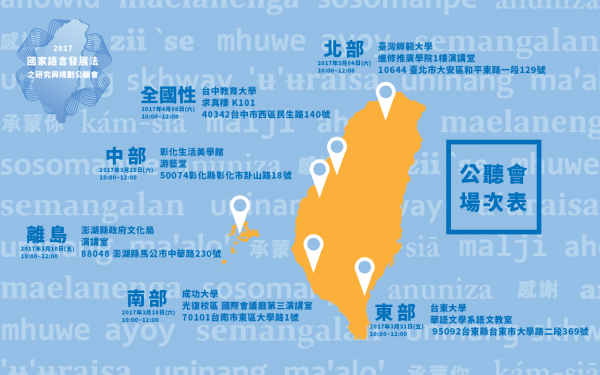 To enhance civic participation in the formulation of national cultural policies, the Ministry of Culture has held six public hearings on the proposed Development Act of National Languages (國家語言發展法) to solicit feedback on methods for preserving the linguistic diversity of Taiwan.

At the Taichung session, which was the last of the six nationwide hearings, Culture Minister Cheng Li-chiun called attention to the gravity of the situation, citing a longstanding and unequal distribution of resources in the past that neglected the inheritance of many native languages in Taiwan.

According to UNESCO's data on Taiwan, there are 8 extinct languages ("no speakers”), 1 rehabilitated language ("brought back from extinction”), 8 that are vulnerable ("spoken by most children”), 1 that is definitely endangered ("not learned at home”), 1 severely endangered ("generational divide between parents and grandparents”), and 5 critically endangered ("only known by grandparents”).

The Minister noted that the native languages used by different ethnic groups in Taiwan - including the mother tongues of new immigrants - are a key element in the construct of Taiwan culture and an important driving factor in national development.

She concluded that preservation work of all languages used in Taiwan should not be viewed as a national responsibility, but as the duty of a global citizen, for "every language is an important asset of human civilization.”

The proposed act will help with defining the term "national languages,” planning and promoting the development of national languages with respect to tolerance and deference to linguistic diversity, researching and rehabilitating endangered languages, and rewarding media outlets for producing multilingual materials.

The full draft of the Development Act of National Languages, which is tentatively scheduled for legislative review in June 2017, is available in Chinese at the Legislative Yuan's website. For more updates, please follow the official Facebook page. 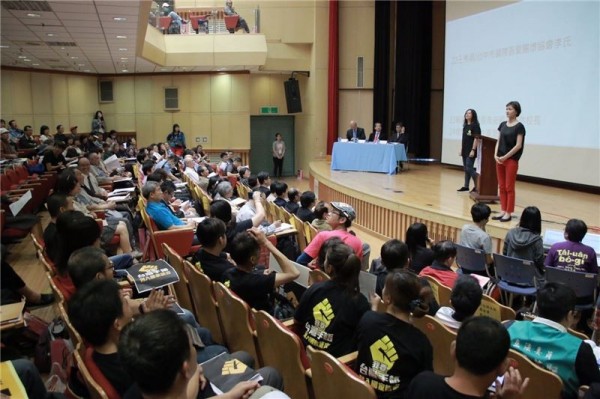 Culture Minister Cheng Li-chiun attended an April 8 public hearing to listen to Taichung’s sentiments on a draft national language act and re-affirm people's rights to use their mother tongues.