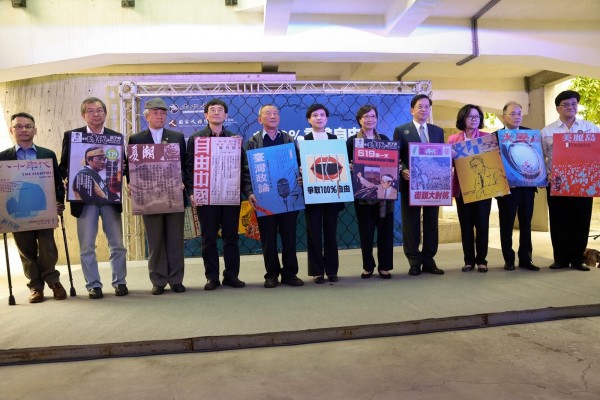 The Preparatory Office of the National Human Rights Museum has curated a special exhibition to commemorate the nation's first Freedom of Speech Day.

April 7, 2017 marks the first observance of Freedom of Speech Day. It was declared by President Tsai Ing-wen last year on the 27th anniversary of the death of pro-democracy pioneer Cheng Nan-jung (鄭南榕), and the date was officially designated by the Executive Yuan as Freedom of Speech Day last December.

"100% Freedom of Speech” will showcase a series of images, pro-democracy magazines, and items that documented the actions of several opposition movements to offer insights into how Cheng's magazines pushed for democracy throughout the past decades.

Culture Minister Cheng Li-chiun (鄭麗君) noted that the designation of Freedom of Speech Day will show how people fought against political oppression to achieve the nation's right to freedom of expression.

Freedom of expression is the foundation of a democratic society, and Taiwan has senior activists to thank for the freedom that people enjoy today. The exhibition not only commemorates the past but also highlights Taiwan's determination to defend freedom of speech and democracy in the future, added the Minister.

Yeh Chu-lan (葉菊蘭), a lifelong volunteer aide at the Nylon Cheng Liberty Foundation, had actively pushed for preserving Cheng's legacy after his untimely death in 1989. It took Yeh more than 16 years to make Freedom of Speech Day an officially commemorated day.

Yeh noted that although Cheng was not the first Taiwanese activist to pursue freedom of speech, his Free China and Freedom Era Weekly magazines had played significant roles in the development of Taiwanese democracy.

Cheng believed that freedom of expression also includes the right to not speak, and that the core value of freedom lies with state sovereignty, she added. Thus, he launched the 519 Green Action in 1986 to protest against the rule of martial Law and fight for freedom.

Culture Minister Cheng Li-chiun stated that the 519 Green Action was what first inspired her to pursue a career in politics. She added that in line with President Tsai's expectations for transitional justice, the Ministry of Culture will hasten to complete the National Human Rights Museum and assist Taiwan's human rights organizations in connecting with their international counterparts.