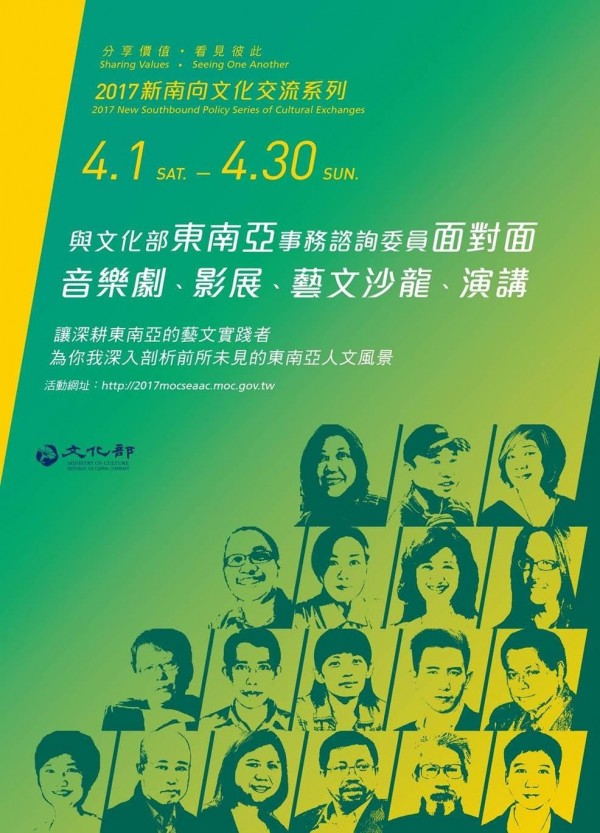 The Ministry of Culture will launch a month-long program to strengthen the ties between Taiwan and Southeast Asia and promote mutual understanding through the multilateral cultural diplomacy that underpins Taiwan's New Southbound Policy.

The 2017 New Southbound Policy Series of Cultural Exchanges will kick off in Taipei on April 1 with the Taiwan-Cambodia musical "Bangsokol: A Requiem for Cambodia.”

The Ministry has also invited a group of Taiwanese and international artists and cultural professionals who have engaged in Southeast Asian cultural affairs to hold dialogue with the people of Taiwan from April 10 through 14.

Other films including "At the Horizon” by Anysay Keola and "A Poet: Unconcealed Poetry” by Garin Nugroho at the evening segment will offer insights into the New Wave Cinema of Laos, as well as the current challenges faced by young Indonesian filmmakers.

The program will then feature Vietnamese-American fine arts photographer Dinh Q. Le, who will share his artworks and creative practice after relocating to Vietnam.

In addition, Mohd Khair Ngadiron, head of the Malaysian Institute of Translation & Books, and Sakai Takashi (坂井隆), an associate professor with the National Taiwan University, will give a joint lecture on Malaysia's Islamic architecture and heritage.

Moreover, several Taiwanese museum directors will join a forum with Lee Chor-lin (李楚琳), former director of the National Museum of Singapore, and Paul M. Sunico, president of the Cultural Center of the Philippines, to discuss the prospects of art institution management and international museum strategies in Asia.

A detailed bilingual schedule of all the events taking place under the 2017 New Southbound Policy Series of Cultural Exchanges is available for download here. Further updates will be posted at http://2017mocseaac.moc.gov.tw.