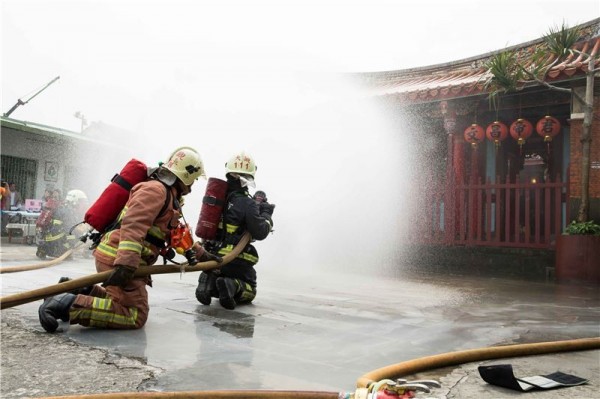 In light of National Monuments Day, which falls on the third weekend of September in Taiwan, the Ministry of Culture has declared September as Cultural Heritage Disaster Prevention Awareness Month.

Age-old heritage sites and buildings are extremely susceptible to damage, and the foremost cause of structural damage is fire. Statistics show that the top five fire triggers at heritage sites are: careless use of fire, arson, poor construction, electrical wiring, and spread of adjacent fire.

Thankfully, the occurrence of fire and the resulting damages can be reduced by improving site/building management, disaster response drills, community participation, and the performance of fire prevention measures.

Simulation drills are an important part of the Tangible Cultural Heritage Disaster Prevention and Protection Program, in which management or users of heritage sites form the "individual” response, police and firefighters make up the "joint” response, and cross-agency cooperation form the "public” response in implementing contingency measures in the aftermath of a disaster.

In 2016, the Ministry of Culture assisted 12 cities and counties - including Taichung City, Yunlin County, and Tainan City - in establishing a professional service center to care for heritage sites and monuments. The 10 remaining administrative divisions have received subsidies to set up similar centers by this July.

The Ministry is also working with the National Police Agency and National Fire Agency under the Ministry of the Interior to assist local governments in conducting relevant drills, installing patrol boxes, setting up monitoring systems to strengthen night-time protection, and raising local community awareness.

As the procedures for heritage site rescue are quite different than usual fire rescue missions, simulation drills are vital for front-line firefighters to become acquainted with these new rules. For example, water should be misted at a lower pressure instead of directly spraying the fire to avoid causing secondary damage to historic structures. First responders are also trained to identify whether the fire originated from elsewhere and make contingency plans.

Nationwide heritage site fire drills will be held throughout the year. That schedule can be found here (Chinese only).