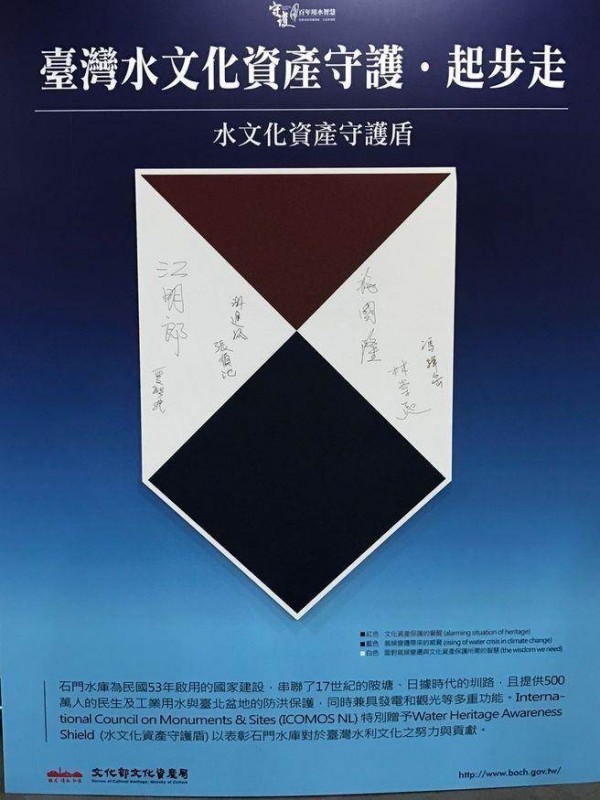 The Bureau of Cultural Heritage under the Ministry of Culture has been honored with the Water Heritage Awareness Shield from ICOMOS (International Council on Monuments and Sites) in recognition of its efforts in preserving and promoting Taiwan's water heritage.

Upon investigating the waterholes of Taoyuan Tableland and the structure of Shimen Reservoir, the Dutch delegation affirmed the former, which has existed for roughly three centuries, for their vital irrigation functions in local agriculture, and commended the latter for its role in providing clean water to northern Taiwan.

The two systems are closely linked and together stand witness to Taiwan's ingenious water usage, leading to the bestowment of the Water Heritage Awareness Shield. The tricolored shield - red for preservation, blue for climate change, and red for human wisdom - now hangs by the entry to Shimen Reservoir.

The Bureau then showcased the first-stage results of its four-year "Investigation and Evaluation of Taiwan's Water Heritage Sites and Systems” project on March 22 to commemorate World Water Day.

The Bureau began the project by searching for potential assets of significant cultural value through a national hydro database in 2015, identifying those that were closely related to regional history and people's memories, and forming a protection network for assets under the jurisdiction of different agencies.

A total of 26 sites have been identified so far and designated as cultural assets, although a handful are still pending formal registration. The evaluation process has isolated three characteristics shared by water heritage sites in Taiwan - made for sharing, adaptive, and of hybridized form and/or technique.

Heritage assets now under protection include the irrigation system of Taoyuan Tableland and the Dajia River water system of Taichung Basin. Both systems have been in place for over three hundred years, patiently serving the water needs of Taiwan's agricultural, industrial, and domestic sectors while doubling as flood embankments.