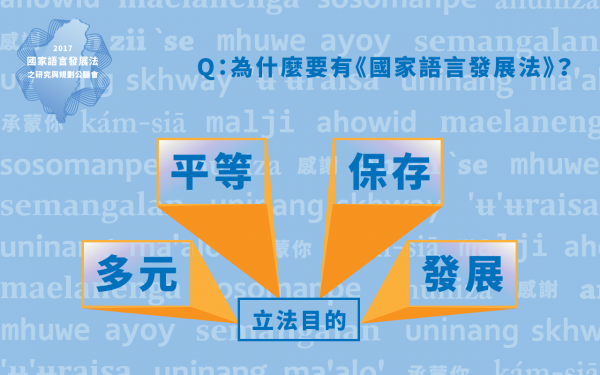 The native languages used by different ethnic groups in Taiwan have been a key element in the construct of Taiwan culture and an important driving factor in national development. However, this vital linguistic diversity now faces a crisis stemming from a longstanding, unequal distribution of resources.

To preserve endangered traditional languages, the Ministry of Culture aims to cultivate language equality through a multilingual environment by enacting The Development Act of National Languages (國家語言發展法).

The main points of the Act are:

1. Defining the legislative purpose of the Act;

3. Prohibiting discrimination against or restricted usage of national languages;

4. Appointing the competent authorities and enforcement agencies regarding the development of national languages;

5. Planning and promoting the development of national languages with respect to tolerance and deference to linguistic diversity;

6. Outlining the government's responsibilities in regards to language development, including preservation, education and research, rehabilitation, and the establishment of a linguistic database for all national languages facing a crisis of inheritance;

7. Defending the media's right to use all national languages and rewarding those who produce and broadcast radio and television shows, publish materials, and stage performances in these languages;

9. Meeting civic demand for services and public resources provided in all national languages and providing the necessary means for government agencies to effectively communicate in these languages;

10. Registering the implementation date of the Act.