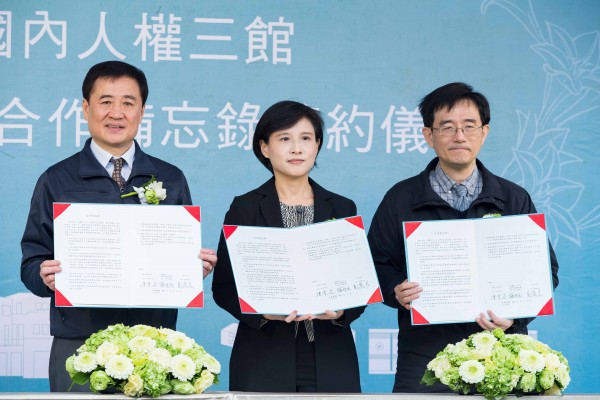 To promote transitional justice in Taiwan, the Ministry of Culture signed a memorandum with the Taipei City Government and the Memorial Foundation of 228 on the occasion of the 70th anniversary of the February 28 Incident.

Signed at the Taipei 228 Memorial Museum, the memorandum is expected to strengthen the study on relevant historical documents and advance human rights education. The occasion was attended by Chairman Chien Ming-ren (簡明仁) of CGCH Foundation for Education as well as families of those who fell victim to the February 28 Incident and the reign of White Terror.

The Culture Minister noted that from the start of the February 28 Incident to the end of the 40-year White Terror, many Taiwanese people sacrificed their lives while their families suffered from discrimination and kept quiet about their personal agony.

Such torment in Taiwan's history of human rights is shared by all regardless of political belief, support for unification or independence, ethnic heritage, or age. "In face of history, we cannot hide, it is time to push for transitional justice,” noted Minister Cheng.

Minister Cheng has been actively finalizing the organizational act for the establishment of the National Human Rights Museum since she took office. The draft has now been sent to the Executive Yuan, and once the act passes review, the museum will become the nation's top institution for human rights education.

The museum will serve as a base for promoting human rights as well as studying, organizing, and displaying the historical documents of post-war Taiwan. It will also support related organizations and institutions to implement the human rights education that serves as the bedrock for democratic societies.

Chairman Xue thanked the Ministry of Culture and all government sectors for supporting the Memorial Foundation of 228, and noted that "the collaboration will offer a platform to re-organize the documents of the February 28 Incident and the White Terror era.”

The victims and their families have been hoping for clarification on historical truths and responsibilities, so that people would remember the events that took place, added Xue.

Taipei Deputy Mayor Chen pointed out that Taiwan's democracy and human rights Taiwan are the result of efforts made by senior democracy advocates. "Taiwanese people should thank those seniors for the freedom we enjoy today, and seek the historical truths for those victimized,” he said.

Chairman Chien shared the story of his father Chien Jing (簡吉), who was seized for advocating the rights of Taiwanese farmers during the Japanese colonial era. "During those years, my family knew where my father was detained; however, my father was chased by the Nationalist government and executed during the February 28 Incident, and we had no clue where my father was kept.”

Chien pointed out that there is a direct cause-and-effect for what made Taiwan into what it is today. He believes that the Taiwanese society can advance further if people can receive rightful punishment or respect for what they did.

The signing of memorandum on the 70th anniversary of the February Incident and the 20th anniversary of the establishment of Taipei 228 Memorial Museum is aimed at bringing together forces to discover the truth for the victims and clear their names. Only by clarifying responsibilities and implementing transitional justice will the Taiwanese society finally be able to heal.