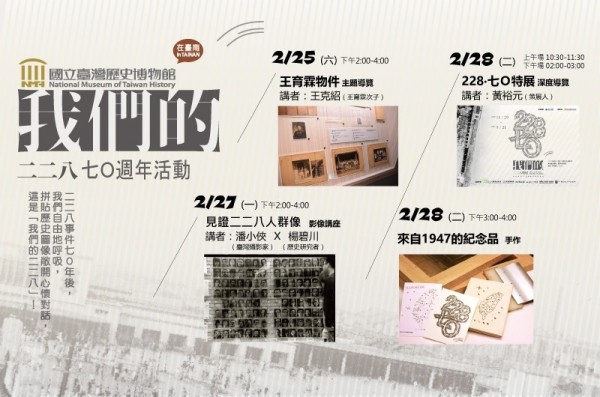 In remembrance of the 70th anniversary of the February 28 Incident, the National Museum of Taiwan History in Tainan will remain open during the four-day weekend and hold a series of commemorative activities during the 228 Peace Memorial Day.

The events will include themed tours, in-depth guides to memorial exhibitions, screenings and lectures, a Taiwan-Japan scholar forum, DIY workshops, and story-telling sessions for children and young adults to re-examine and commemorate the 1947 historic uprising in Taiwan.

On the first day of the four-day weekend, the museum will invite donors of cultural relics that are displayed at "Our 2.28” memorial exhibition, such as surgeon Wang Ke-shao (王克紹), the second son of the victimized Wang Yu-lin (王育霖), to share historic anecdotes from his family's painful past.

The "Our 2.28” exhibition is also displaying the handwritten will, clothes, and other personal items left behind by Chen Cheng-po (陳澄波), a notable painter who was executed in the incident.

Donated by the Chen Cheng-po Cultural Foundation to the National Museum of Taiwan History, the collection is part of key evidence that will be showcased until May 21.

On Feb. 26, the museum will host Hiyama Yukio (檜山幸夫), a Japanese scholar from Chukyo University (中京大学). Hiyama is one of the guest speakers at the Taiwan-Japan forum who will carry out in-depth dialogue on the historic memories and significance of the 1947 incident.

Photographer Pan Hsiao-hsia (潘小俠) and editor Yang Bi-chuan (楊碧川) of the book "The Testimonies of 228 (見證二二八)” will also make an appearance on Feb. 27 at the museum's "Forty Years of Silence” audio exhibition.

The museum will then host a weekly series titled "2.28: 70 Years after the 2.28 Incident.” Professors Lee Hsiao-feng (李筱峰), Hsu Xue-ji (許雪姬), Hua Yih-fen (花亦芬), and Xue Hua-yuan (薛化元) will co-chair the weekend forums and offer perspectives concerning the micro and macro implications of the incident.

Last but not least, there will be story-telling sessions throughout this weekend to help children and young adults learn about human rights through picture books featuring stories of hope and courage. Other mediums such as DIY craft sessions and in-depth exhibition guides will also help the public to review the past and look to the future.