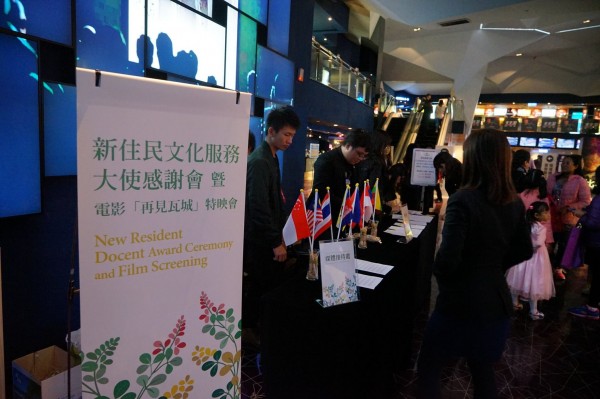 Six "new immigrants” - the official term used by the government to refer to an estimated 640,000 residents who have immigrated from mainly China and Southeast Asia through marriage and work - were honored at the ceremony.

Shih, who left Indonesia 17 years ago, now works as a surveyor at the Taipei City Government's Foreign and Disabled Labor Office. She volunteered as a translator for an exhibition on Islamic culture at the National Taiwan Museum in 2014 and has remained as a voluntary docent since, introducing the museum's collections to compatriots from Indonesia during the weekends and special holidays.

Juan Fang-hua came to Taiwan after falling in love with her husband, whom she met as a professional interpreter while he was doing business in Vietnam. Moreover, she became a museum docent in the hope of becoming more proficient in teaching her children about Taiwan, stating that she still regularly attends training sessions to learn more interesting information.

Before the screening of "The Road to Mandalay (再見瓦城),” the Culture Minister noted that the dedication speech given by Midi Z upon winning the Outstanding Taiwan Film Worker of the Year at the 53rd Golden Horse Awards last month has warmed many Taiwanese hearts. He also represents the cultural success that can be achieved by all new immigrants of Taiwan, Cheng added.

In line with the government's New Southbound Policy, the Ministry of Culture has several programs dedicated to fostering exchanges with Southeast Asia, including the Emerald Initiative, a subsidy mechanism to help SEA artists visit Taiwan, and the Youth Cultural Gardeners, in which Taiwanese youths are sent overseas to meet and collaborate with their SEA counterparts.