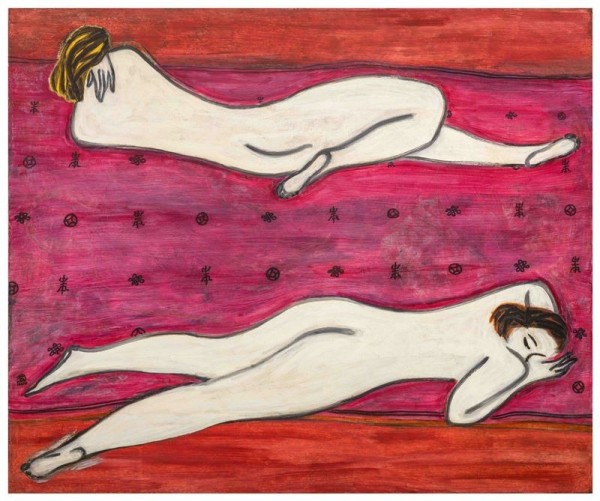 The National Museum of History is home to nearly 1,000 western-style paintings, of which 49 by the late artist Sanyu (常玉) have just been painstakingly restored to healthy conditions.

Sanyu (1900 - 1966) was a painter from the Republic of China who was known as "Henri Matisse of the Orient” and "The Amedeo Clemente Modigliani of China.” Although he spent most of his life in Paris, he never received formal training in the arts. The simple yet unique style of painting he developed was a genuine feat of originality.

Of the 52 Sanyu items in the NMH's collection, 42 were oil paintings bestowed by the Ministry of Education in 1968, five were oil paintings confiscated in the Kuo Yu-shou (郭有守) espionage case in 1986, two were additional oil paintings procured in 1990, and three were sketches purchased in 2011.

Among these items, "Four Nudes (四裸女)” and "Chrysanthemum (菊)” have been declared "important antiquities” of the nation by the Ministry of Culture.

Many of these paintings warranted repair because of their initial conditions and the less-than-ideal storage environment. When an exhibition opportunity presented itself, the NMH procured funds to restore and display 35 paintings that were in relatively better conditions from 1998 through 2001, but those in poorer shape were never fully repaired.

This year, to mark the 50th year of Sanyu's death, the museum applied and received grants from the Ministry of Culture on the basis of Article 13 and 14 of The Museum Act, which stipulates strengthening the allocation of resources for the purpose of restoring or maintaining important museum collections. The NMH subsequently conducted scientific examination, restoration, and frame-mounting operations on 49 paintings.

Repairs were then conducted based on the principles of reversibility, integration, and sensibility before the paintings were mounted. Each step of the process has been filmed and made into a documentary, which the museum will release to help the general public have a more thorough understanding of how and why cultural artifacts are restored.

The National Museum of History will also be attending the Hong Kong International Licensing Show from Jan. 9 to 11, where it will discuss licensing opportunities regarding its Sanyu collection.