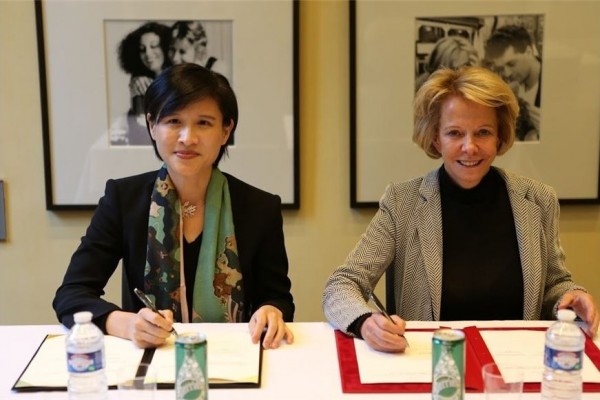 To strengthen film exchange and collaboration between Taiwan and France, Culture Minister Cheng Li-chiun (鄭麗君) signed a cooperative agreement with Frédérique Bredin, president of the National Centre for Cinema and the Moving Image (CNC) in Paris, on Nov. 30.

Under the authority of the French Ministry of Culture, the CNC is a publicly owned organization established to support and promote French cinema and audiovisual arts, and to protect national cinematographic heritage.

The agreement - which includes the exchange and cooperation in media asset preservation, audiovisual education, film production, and anti-piracy - marks an important milestone in the long-term partnership between the two nations.

The CNC, with rich experience in regulation and management of the French film industry, will also provide the Ministry of Culture with advice and assistance in shaping Taiwan's audiovisual policy.

In regards to audiovisual education, the two sides have agreed to both select one film per year for educational purposes, which will help make Taiwanese films become a part of French education and reach a broader French audience.

In the field of media asset preservation, the CNC will offer its professional restoration knowledge and assist the Ministry of Culture to cultivate relevant experts in Taiwan.

After signing the accord with CNC, Minister Cheng met with Jerome Baron, the artistic director of the Festival des 3 Continents, to seek channels in closer collaboration.

The annual film festival in Nantes places a special emphasis on promoting films from Africa, Asia, and Latin America. Taiwanese directors, including Hou Hsiao-hsien, Edward Yang, and Tsai Ming-liang, are previous recipients and nominees of the festival's Golden Montgolfiere Award.

The year 2018 will mark the 40th anniversary of the Festival des 3 Continents and the Ministry of Culture and the festival will organize film screenings featuring restored Taiwanese classic films to celebrate the four-decade milestone.