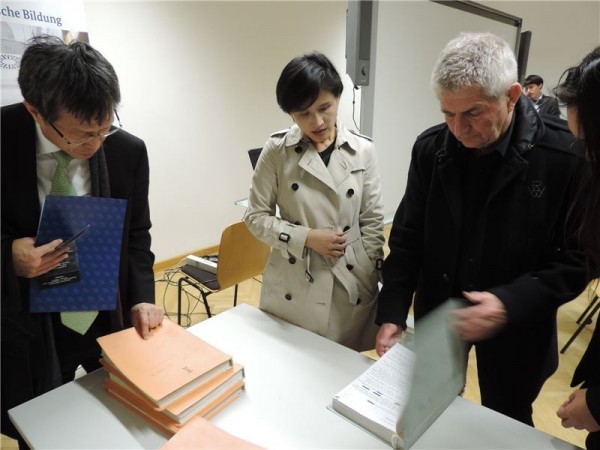 To learn more about Germany’s experience in transitional justice, Culture Minister Cheng Li-chiun (鄭麗君) made her first stop in Germany at Stasi Museum Berlin, which was the former Ministry for State Security, on Nov. 24.

The Ministry for State Security (Stasi) was the intelligence and security agency of East Germany. After the German reunification, the declassified surveillance files were made available to citizens for inspection upon request. Today, these files are protected by the Stasi Records Act.

Roland Jahn, Federal Commissioner for the Stasi Records, took Minister Cheng on a tour of the office buildings and the state archive department, and explained his team’s approach towards preserving the historic site and realizing transitional justice.

Commissioner Jahn also accompanied the Minister and her delegation into the archive room housing Stasi files, and explained how his team is painstakingly restoring the files that were destroyed by the security office of East Germany.

Minister Cheng noted that Taiwan may have a long way to go in terms of realizing transitional justice, but the Ministry of Culture’s primary mission is clear – to organize, investigate, and study the files from the White Terror era (1949 – 1987), and to build a management system to preserve such records.

By learning about how Germany handles sensitive files while ensuring privacy and the protection of citizen rights, as well as how the German public participated in the making of the Stasi Records Act, the Ministry of Culture hopes to soon establish a museum devoted to human rights.

The primary mission of a National Human Rights Museum will be to publish the historical truth, explained Minister Cheng to Commissioner Jahn. She hopes that the human rights of the Taiwanese people will also be protected when the White Terror files are made publicly available.

The Minister promised to continue gathering advice from key professionals and encourage public engagement so as to strengthen the values of democracy in Taiwanese society. She also invited the Commissioner to visit Taiwan and share his extensive experiences in heritage preservation and revitalization.