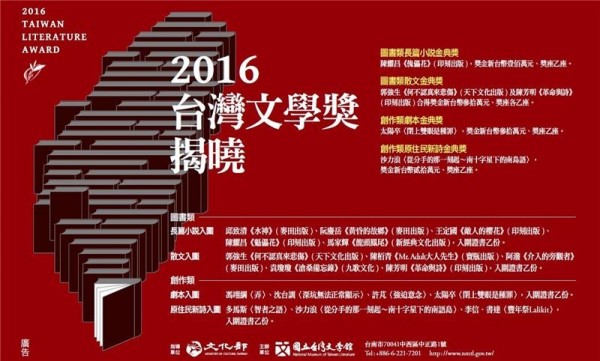 The Novel Award for the books category goes to Chen Yao-chang (陳耀昌) for "Puppet Flower (傀儡花).” The Judges praised Chen's ability to build up an accurate historical point of view, noting that his intertwinement of reality and imagination was "outstanding.” The writer will receive a cash prize of NT$1 million and a trophy.

The Novella Award for the books category goes to Kuo Chiang-sheng (郭強生) for "Why Not Be Seriously Sorrowful (何不認真來悲傷)” and Chen Fang-ming (陳芳明) for "Revolution and Poetry (革命與詩).” They will each receive a cash prize of NT$150,000.

Chang Ray-fen (張瑞芬), who served on the jury panel, noted that Kuo crafted a stunning story that reflects human nature and evokes a sense of melancholy through his precise language.

Yan Kun-yang (顏昆陽), another panel member, believed that Chen Fang-ming showed a flair for exploring society against a different timeframe and background.

The Script Award for the original works category goes to Tai Yang-zu (太陽卒) for "It's a Sin to Shut One's Eyes (閉上雙眼是種罪).” Tai will be awarded a cash prize of NT$300,000 and a trophy.

Jury Chiu Jun-liang (邱坤良) believed that Tai's script, which focused on the conversations between a mother and her two daughters, has a subtle storyline mirroring the recent spike in random attacks across Taiwan.

The Aboriginal Poetry Award for the original works category goes to Bunun author Salizan Takisvilainan (沙力浪) for "From the Moment of Breakup ~ The Austronesian Isle Beneath the Crux (從分手的那一刻起〜南十字星下的南語島).” Salizan will receive a cash prize of NT$200,000 and a trophy.

Salizen's poem was praised by jury Sun Ta-chuan (孫大川) for the deft combination of his mother tongue and Chinese language, as well as its lyrical and joyful tone.

All submissions had undergone three stages of review. The award ceremony will be held at the National Museum of Taiwan Literature in Tainan on Dec. 10.

The 2016 shortlisted submissions include: 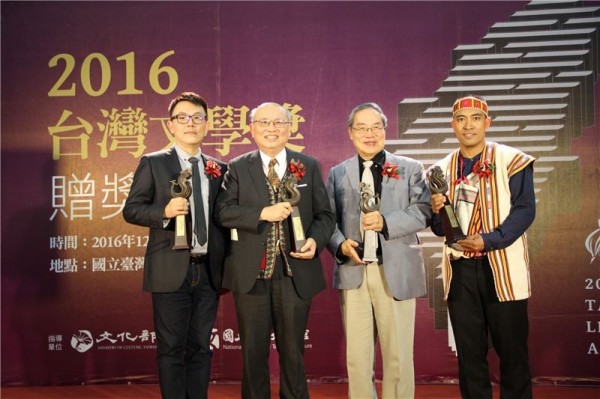 Laureates Kuo Chiang-sheng (first left), Chen Yao-chang, Chen Fang-ming, and Salizan Takisvilainan pose with their trophies at the Taiwan Literature Awards on Dec. 10, 2016. Tai Yang-zu, winner of the Script Award for the original works category, is not pictured above. facebook googleplus twitter print