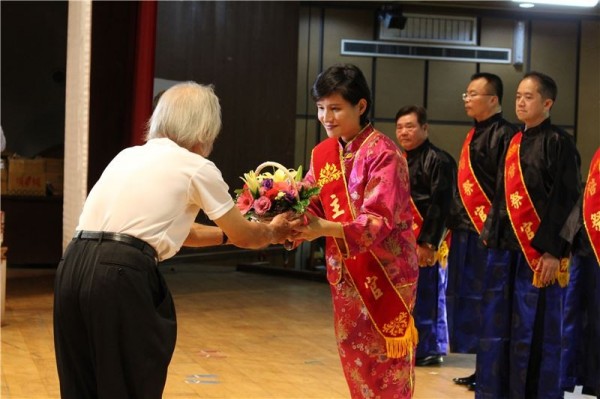 The Lu Ban Banquet is named after the resourceful Chinese carpenter Lu Ban (鲁班), patron saint of craftspeople and construction workers. The event was launched in 1996 to combine traditional crafts and folk beliefs and takes place annually near the patron saint's birthday, which falls on May 7 on the lunar calendar. It was designated as a heritage custom by the Changhua County government in 2008.

Minister Cheng was invited to officiate as the chief celebrant at this year's Lu Ban Banquet while renowned local craftsmen served as deacon personnel, presenting a heartwarming atmosphere of worship before the minister departed to inspect the preservation work conducted on Lungshan Temple.

The grade-one national historic site came under governmental protection in 1983, but it was severely damaged by a 7.3-magnitude earthquake on Sept. 21, 1999. Preliminary restoration was carried out between 2001 and 2008 using NT$200 million donated by Pou Chen Group (寶成集團), a footwear manufacturer based in Lukang.

The Tainan National University of the Arts was then commissioned to conduct the "National Historical Site Lukang Lungshang Temple Colored Paintings Survey and Research Project” between 2007 and 2009. A restoration supervision committee was established between 2009 and 2011 and the single-color restoration work was carried out between 2013 and 2015 under the sponsorship of Pou Chen Group.

The minister praised the Cultural Heritage Preservation Research Center (文化資產保存研究中心) for assisting with the restoration of the single-color painting of Lukang Lungshan Temple's main gate and the multi-colored paintings of ten door gods at the temple's five-door hall. The restoration work was meticulously done by veteran painter Kuo Hsin-lin (郭新林), whose strokes retained the classical Quanzhou style of the original temple.

Rich in both tangible and intangible cultural assets, Lukang Township is a valued heritage center. The Minister avowed that the Ministry of Culture and the Changhua County government will continue to seek cooperation with civic groups in preserving and promoting the nation's precious cultural inheritance. The minister (center, in red) receives a basket of flowers from woodcarving master Shih Zhen-yang (left). 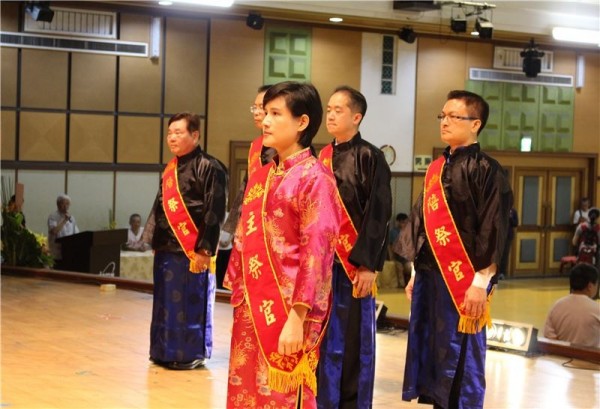 A total of 108 tables were loaded with offerings such as lanterns, statues, and paintings to commemorate Lu Ban, patron saint of crafts. 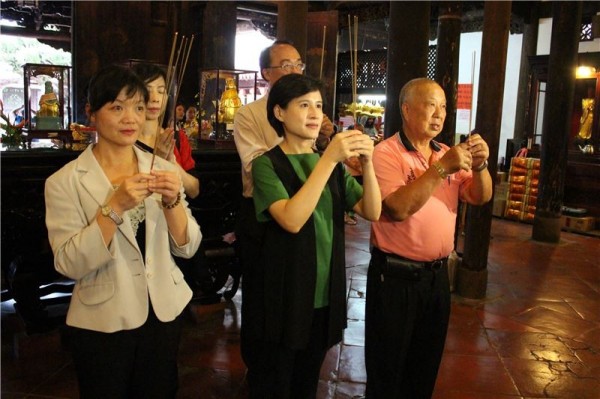 The minister (center, in green) also paid her respects by offering incense at the Lukang Lungshan Temple.