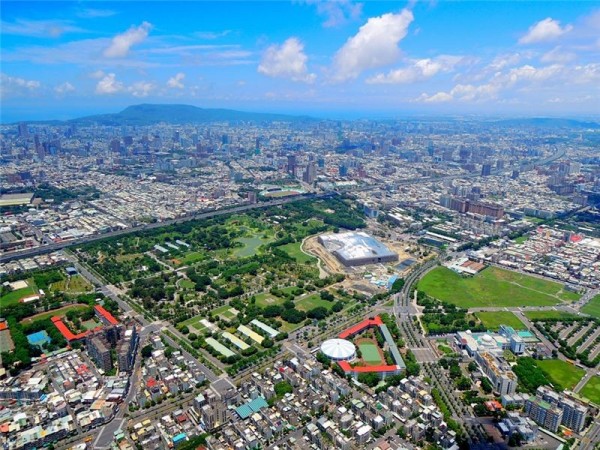 The president noted that the center will not only provide artists from home and abroad with an excellence performance venue, the Kaohsiung landmark will also drive local cultural growth and creative businesses while enhancing the cultural attainment of the local population.

The Wei-Wu-Ying Center is built on over 10 hectares of land and encompasses a world-class theater, a medium-sized theater, a concert hall, an auditorium, and an open-air theater. The amount of steel used in its construction amounts to three times of that used to build the Eiffel Tower, President Ma pointed out, adding that its capacity of 5,984 indoor seats will make the Wei-Wu-Ying Center the largest theater complex in Asia upon its inauguration next year.

Culture Minister Hung Meng-chi explained that the Wei-Wu-Ying Center will be connected to proximate facilities such as the Chiayi Cultural and Creative Industries Park, the southern branch of the National Palace Museum, the Kaohsiung City Dadong Arts Center, and the Pingtung Performing Arts Center to form a cultural corridor in southern Taiwan.

The Ministry of Culture has also invited Chien Wen-pin (簡文彬), a renowned classical conductor trained in Germany, to become the inaugural artistic director of the Wei-Wu-Ying Center. He will serve as the liaison contacting foreign arts groups and securing international performances for the Kaohsiung stage.

In addition to collaborating with local arts groups from Chiayi, Tainan, Taitung, and Kaohsiung, the Center will also work together with the Taipei-based National Theater & Concert Hall and the National Taichung Theater in central Taiwan to place the island on the international arts map.

The National Wei-Wu-Ying Performing Arts Center project was first proposed by the Council for Cultural Affairs (predecessor of the Ministry of Culture) in 2003, and approved by the Executive Yuan in 2005. A preparatory office was established in 2007 and construction kicked off in 2010.

The program is part of the six cultural venues listed in the fourth of eight national visions, "Quality Culture and Education - Building Taiwan into a Major Country with Quality Culture and a Key Place for Higher Education in East Asia,” presented by President Ma when he ran for re-election in 2012.

As of April 2016, 95% of the Wei-Wu-Ying Center program has been completed on a NT$10.58 billion budget, and construction is scheduled for completion later this June. The Kaohsiung landmark is expected to be fully operational by 2017.

Pictures from the president's visit can be found here.