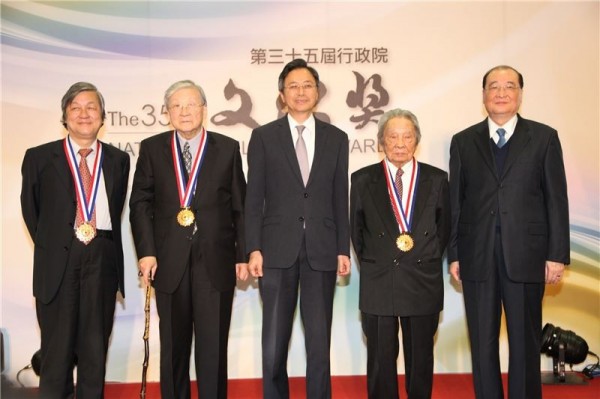 Li Hsing, dubbed the "Father of Taiwanese Cinema,” is a director who plays a leading role in the making of Taiwanese-language comedies and "wholesome realism” films that portray the optimism of Taiwanese people. Some classic examples include "Brother Liu and Brother Wang on the Roads in Taiwan (王哥柳哥遊台灣),” "Oyster Girl (蚵女),” and "Beautiful Duckling (養鴨人家).” After a career as a filmmaker spanning over two decades, Li continues to serve as a heavyweight contributor to the film industry today.

Li Chien-lang is recognized for his significant role in heritage restoration work and his contributions to research on traditional architecture. Li's publications, illustrations, and photographs of traditional buildings such as Tamsui Old Town and Kinmen Fujian-style mansions have helped to raise public awareness of the need for heritage preservation in Taiwan.

Chung, a writer of Hakka descent, is the spearhead of the roman-fleuve (river-novel) literary movement in Taiwan. His literary works include "The Dull Ice Flower (魯冰花),” "Muddy Water Trilogy (濁流三部曲),” and "Taiwanese Trilogy (台灣人三部曲),” which reflect the struggles of Taiwanese youths in a changing society. As an inspirational figure who helped shape the style of modern Taiwan literature, Chung has also spared no effort in promoting Hakka culture and cultivating young talented writers.

Culture Minister Hung Meng-chi (洪孟啟) noted that the three recipients each play an important role in the development of film, heritage preservation, and literature in Taiwan. Premier Simon Chang (張善政) also lauded the laureates for their determination and persistence in pursuit of their lifelong vocation.

Launched by the Executive Yuan in 1981, the National Cultural Award is the most prestigious cultural award in Taiwan. It has since honored 76 cultural maestros with a medallion, a certificate, and a cash prize of NT$1 million each.

More information on the past laureates can be found at the Cultural Maestros section.