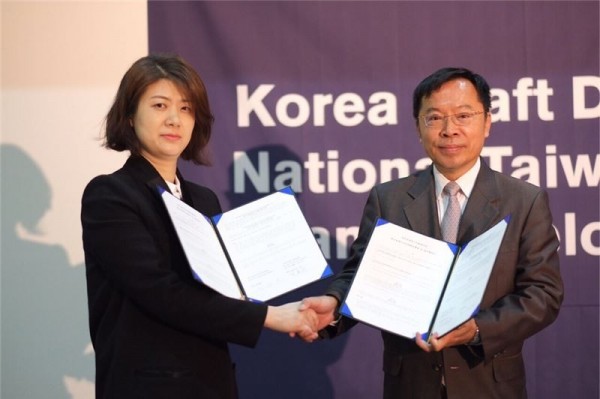 The National Taiwan Craft Research and Development Institute (NTCRI) has forged a new cooperative pact with the Korea Craft & Design Foundation (KCDF) in a move that will unite resources from Taiwan and South Korea to promote the crafts industry.

A memorandum of understanding was signed on Dec. 18 at the opening ceremony of the Craft Trend Fair 2015, an annual trade show in Seoul organized by the KCDF. The signing of the MOU stemmed from the KCDF's desire to establish a platform for long-term cooperation and exchanges between Creative EXPO Taiwan and the Craft Trend Fair.

Tasked by the South Korean Ministry of Culture, Sports and Tourism to preserve the culture and value of Korean handicrafts, the KCDF shares similar missions and duties as the NTCRI of Taiwan, prompting the ROC Ministry of Culture to appoint the NTCRI as the contact window for establishing a market expansion mechanism and deepening mutual cooperation through craft expos.

NTCRI Director Hsu Keng-hsiu (許耿修) noted that the agreement was signed under the principles of equality and bilateral respect, in which future cooperative arrangements will focus on exhibition participation and branding. The KCDF will organize a delegation to participate in Creative EXPO Taiwan 2016, which is slated for next April, while the NTCRI will represent Taiwan at the yearend Craft Trend Fair 2016.

The MOU is expected to effectively expand international market share for both nations. Moreover, the NTCRI has prepared an integrated marketing approach that will bolster Taiwan's overall brand image and facilitate exchanges between local creative businesses and their Korean counterparts to market quality Taiwan-made craft products.