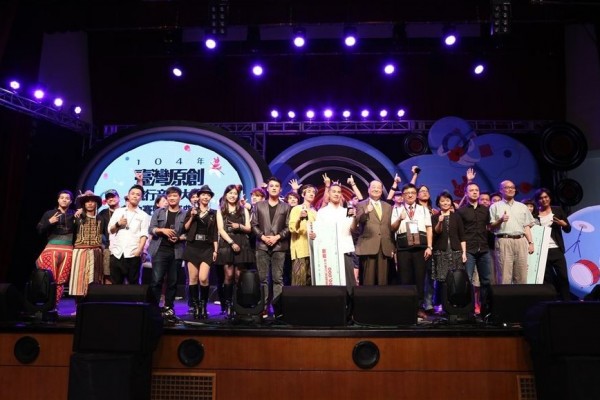 The winning shortlist of the 12th Taiwan Music Composition and Songwriting Contest was announced on Aug. 29, with the first prize going to Chou Wei-chung (周偉忠) for the indigenous languages category, Lai Yu-ciao (賴予喬) for the Hakka category, and Lin Chih-li (林志立) for the Taiwanese Hokkien category.

Each of the 3 categories had 10 finalists who were competing for the NT$300,000 first prize. The contest finale and the awards ceremony were presided by Culture Minister Hung Meng-chi (洪孟啟) and judge panels from the Council of Indigenous Peoples and the Hakka Affairs Council.

The ceremony kicked off with a performance by the Golden Melody Award-winning band BOXING (拳). Winners of the 2014 contest, including Evan Roxy (鄭逸凡), Dai Hsiao-chun (戴曉君), Huang Hsiao-chien (黃筱茜), and Chang Si-an (張錫安) also joined the stage to show support for the competition.

To commend the musicians who use native languages in their music, Jacky Chen (陳建瑋) also sang Taiwanese songs for the grand finale of the awards ceremony. Chen was named Best Male Mandarin Singer at the 25th Golden Melody Awards.

In addition to providing the NT$300,000 cash prize, the Bureau of Audiovisual and Music Industry Development will also sponsor the winners in recording music videos and releasing a compilation album.

A music concert will be held at 7pm on Sept. 26 in the plaza of Taipei's Xinyi District. The finale will air from 9pm - 11pm on CTI on Sept. 19, following a special look back airing from 2pm - 4pm on MTV.